In what can only be described as a Mets-esque fiasco, the Yankees managed to totally blow last night's Mariano Rivera bobblehead giveaway. The franchise was expected to distribute 18,000 bobbleheads to early bird fans in honor of the All Star closer's final season, but when it came time for the gates to open, the bobbleheads still hadn't arrived at the stadium.

It's Mariano Rivera bobblehead night at Yankee Stadium ... and they don't have the bobbleheads. #Yankees

The team decided to keep the gates shut until the merchandise arrived and fans became enraged as Babe Ruth Plaza filled up. We spoke with Yankees fan Ray Guido at the stadium who told us that nobody from the organization offered any explanation to fans waiting outside, sparking rumors about the situation and eventually causing chaos outside the gates. "It would have been easily avoided if they'd just sent some people out to make queue lines, seeing what the situation was, but they just didn't do that," Ardito explained. "I got here at 5 p.m. thinking that was crazy, that was way too early, but I just did and I didn't get in 'til almost six."

In a sea of Yankees fans..all because of Mariano Rivera bobblehead day #Insane pic.twitter.com/WnB1IaaAgo

Without actual bobbleheads to hand out, the team was forced to issues vouchers for fans to pick them up later in the game.

For those wondering, this is what the #Yankees are giving out in lieu of a Mariano Rivera bobblehead. pic.twitter.com/FpBBRPTjRl

During the third inning, an announcement told voucher-wielding fans they could pick up their bobbleheads in the stadium, though multiple fans we spoke to said they didn't even hear the announcement. In minutes an absolutely ridiculous line formed and snaked its way through multiple levels of the stadium.

For most fans, waiting on line meant not being able to actually watch the game. "I'm hoping that I can get this before Mariano goes to pitch," said Guido. "Because I can't see anything right now cause there's a stone wall right here."

Fans eventually received their precious pieces of plastic after waiting for over an hour in many cases. Behold the source of all the insanity: 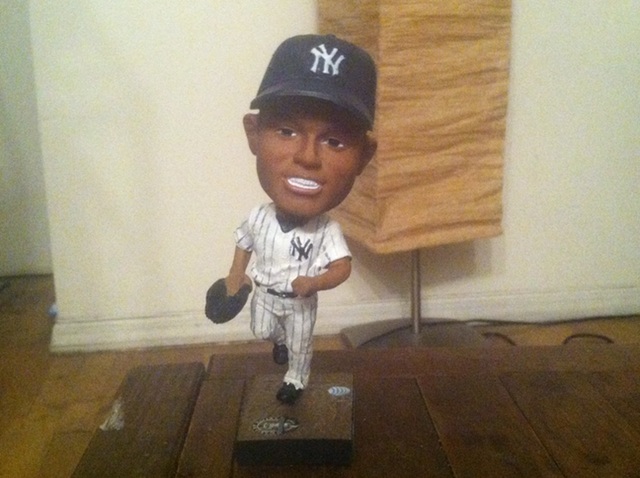 When we spoke with him, Guido was still on line with no end in sight. Asked if he would leave the line if the Yankees started winning, Ardito unequivocally said yes. "If all of a sudden we started coming back? Absolutely. Baseball comes first before bobbleheads."

#bobbleheads
#fuck ups
#mariano rivera
#sandman
#yankee stadium
#Yankees
Do you know the scoop? Comment below or Send us a Tip