The FDNY is on scene near 200 5th Avenue in the Flatiron District dealing with a van that has gone up in flames.

An FDNY spokeswoman told us that at 11:02 a call came on regarding "what looked to be a van" on fire on the street. The Fire Department is still on the scene and could not say at this time whether the van caught fire or "exploded." It's still unclear if anyone is injured.

We'll update when we have more information.

UPDATE 11:45:Business Insider is reporting that the driver was inside the vehicle when the flames started but made it out safely.

UPDATE 12:10: We have spoken with Michelle Su, who works for Cohn & Wolfe, a PR firm with an office at 200 5th Avenue—the building the burning van was directly in front of. Su did not hear an explosion and doubts there was one "because the warnings and updates were gradual."

First she heard notices of smoky conditions, then fire, and then instructions to not leave the building and stay away from windows. She was in a conference call "when the building alarm system went off warning" of smoky conditions. They were initially told that there "may have been a casualty" though the report hasn't changed stating any injuries (thus far).

UPDATE 2:00:NBC 4 New York has spoken with the driver of the van, 60-year-old Moses Huggins, who works for a 27th meat wholesaler and was on his deliveries when he escaped from the vehicle "less than a minute" before it was engulfed in flames. The van, a white 2005 Chevy, suddenly began to smoke during his route.

Huggins pulled over on 5th Avenue and Broadway when a security guard from a building close by told him that the smoke was coming from underneath the car, beckoning him to get out. Moments later, the van was in flames. NBC 4 confirms that there was no explosion. 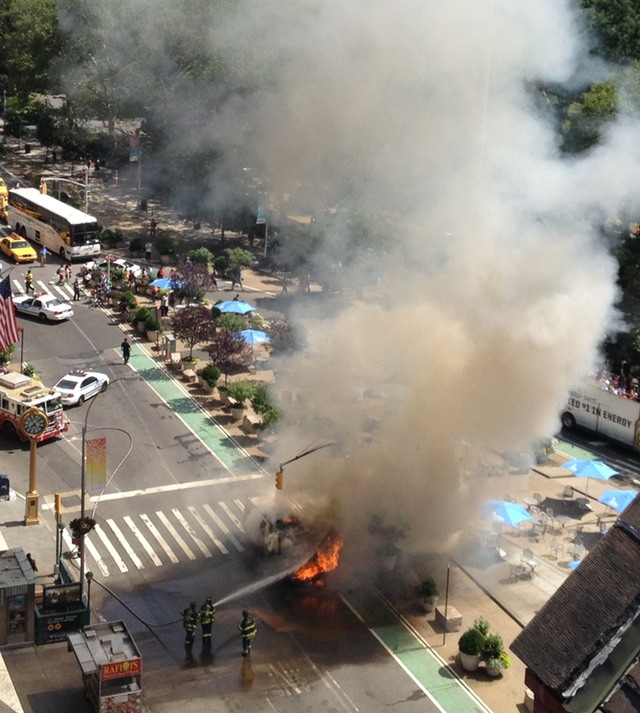