[UPDATE: VIDEO BELOW] NYPD Commissioner Ray Kelly held a press conference on the topic of a Bronx bodega robbery that left one employee dead this morning. Initial reports suggested that the employee was shot by police responding to the robbery, possibly because they thought he was one of the robbers when he ran out of the bodega. That has now been confirmed.

The press conference is underway over, and so far Kelly has told reporters that the NYPD did shoot the employee, Reynaldo Cuevas, and that it was an accident. We'll have updates as they come in. 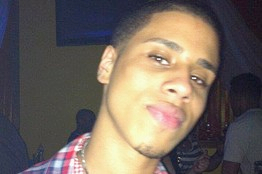 Update 1:25 p.m.: The video showed the scene from two different angles. Video shows the night manager exit the store first and speak briefly to the officer, followed by Cuevas (pictured here), who was sprinting out of the bodega when he collided with the officer, whose gun was drawn. Kelly told reporters the officer's gun discharged as the two tumbled "down towards the ground," and that Cuevas was shot in the back left shoulder as they fell. There was no exit wound. The .32 caliber handgun used in the botched robbery was not loaded, and found hidden behind a bag of bird seed in the bodega.

Asked about the police response/procedure to the robbery, Kelly told reporters, "I see nothing wrong with the procedure." The officer who fired the shot is a seven-year veteran who works with a nearby Housing Bureau and had never discharged his weapon before. "It's a terrible tragedy," Kelly added, before expressing his condolences to Cuevas' family. Per departmental procedure, the officer has been placed on administrative leave while an investigation is conducted.

The three suspects entered the bodega at around 1:50 a.m. and demanded that Cuevas and the night manager, Felix Mora, lay down on the ground. Mora is seen on surveillance video being pistol whipped by the gunman, believed to be 32-year-old Orlando Ramos, who was wearing a ski mask. Kelly said the suspects placed lottery tickets, packs of cigarettes, and around $1,700 $718 into a backpack. 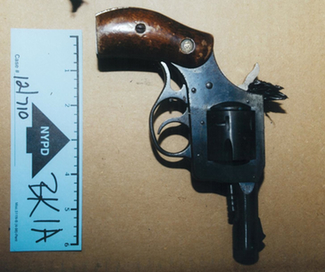 The gun recovered in the bodega.

A passerby saw the robbery in progress and called 911. Shortly after police responded, one of the suspects yelled "Polícia" three times, and suspects Ramos and Ernesto Delgado, 28 fled towards the back of the store, giving Cuevas and his manager time to flee. Suspect Christopher Dorsey, 17, fled the store shortly after Cuevas was shot, and was detained.

Delgado and Ramos were arrested after a long standoff that lasted until 5:30 a.m., Kelly said, during which the NYPD sent a robot into the bodega to send back surveillance footage. Delgado surrendered first, and according to the Times, claimed he had been held hostage by a gunman. Ramos was found in basement, where he had his hands tied "loosely" in an attempt to give the appearance that he was himself a hostage.

Update 4:35 p.m.: The NYPD has released security camera video of the shooting, below, which shows the incident from multiple angles. In a statement, the NYPD also notes, "A uniformed officer was processing an arrest at the 42nd precinct station house when he heard a call for assistance in connection with this robbery go over the air. He responded in a police car, alone, and collided with a range rover stopped at a red light at 163rd street and third avenue, resulting in minor injuries to the civilians. The officer, who was pinned in the police car, sustained a broken left femur and a possible fractured nose."

#fatal shooting
#gun violence
#nypd
#nypd shooting
#the bronx
#original
Do you know the scoop? Comment below or Send us a Tip