Mayor Bill de Blasio officially kicked off his presidential campaign on Thursday morning by sharing a video to introduce himself to a national audience, before appearing on Good Morning America for his first interview as a 2020 candidate. He begins the video by declaring, "There's plenty of money in this country, it's just in the wrong hands!" (One of his common refrains).

The three-minute video positions de Blasio as a working people-first leader who has brought free, universal pre-K to New Yorkers, as well as guaranteed health care and a $15 minimum wage. The video also credits the mayor for giving legal assistance to migrant families at the border and introducing tough environmental regulations, positioning de Blasio as someone who can take on President Donald Trump. (For a look at de Blasio's effectiveness, please refer to "America's Guide To Bill de Blasio, NYC Mayor And Possible Presidential Candidate." For a look at why de Blasio's run might be a "laughable proposition," here's "Why De Blasio 2020 Makes So Many New Yorkers See Red" by Ross Barkan.)

The opening montage features New York City-scapes and New Yorkers. Early on, de Blasio says, "Here in NYC, a place that is legendarily tough and big and complicated, the good thing about New Yorkers is that they look the same if they're really pissed off at you or really like you." At this point, de Blasio appears to be sitting in his mayoral SUV which... could raise questions. 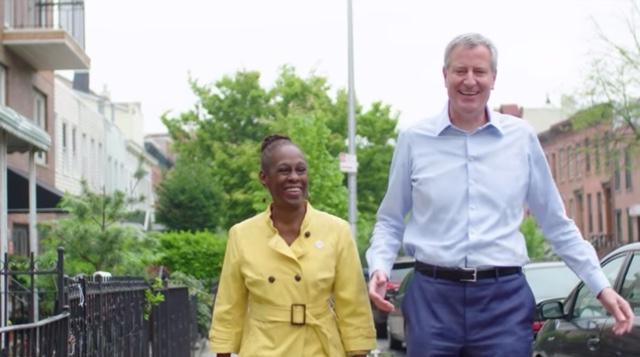 First Lady Chirlane McCray is featured around the one-minute mark, talking about health care and pre-K. Then, at the 1:30 point of the video, the footage shifts from the city to rural America and faces of non-New Yorkers, with de Blasio narrating, "It doesn't matter if you live in a city or a rural area, a big state a small state, it doesn't matter what your ethnicity is. People in every part of this country feel stuck or even like they're going backwards. But the rich got richer."

Ominous music plays as the scene shifts to the White House. "I'm a New Yorker; I've known Trump's a bully for a long time," de Blasio says in the video. "This is not news to me or to anyone else here. And I know how to take him on."

De Blasio reiterates this at the close of the video, saying, "Don't back down in the face of a bully. Confront him. Take him on," while delivering his final message: "As president, I will take on the wealthy, I will take on the big corporations. I will not rest until this government serves working people. As mayor of the largest city in America, I've done just that... Donald Trump must be stopped. I've beaten him before, and I will do it again. I'm Bill de Blasio. And I'm running for president because it's time we put working people first."

De Blasio, as it's been pointed out, is entering a very crowded field of Democratic contenders. The firm that produced de Blasio's memorable first TV ad for his 2013 mayoral campaign—the one with a then-15-year-old Dante de Blasio talking about his dad—has signed on to South Bend Mayor Pete Buttigieg's team. (South Bend's population is a little over 100,000.)

Neither Dante, nor de Blasio and McCray's daughter, Chiara, are featured in this campaign video. But the First Lady will be joining de Blasio on Good Morning America.

UPDATE: During the Good Morning America interview, anchor George Stephanopoulos brought up how de Blasio is now the 23rd candidate to join the Democratic field. De Blasio summed up his edge as, "Working Americans deserve better. And I know we can do because I've done it here in the largest, toughest city in the country. We're putting money back in the hands of working people, and I say it very bluntly, there's plenty of money in this world, in this country, it's just in the wrong hands."

"Working Americans deserve better." New York Mayor @BilldeBlasio is the 23rd Democrat to enter the presidential race and says putting money back in working people's pockets is what will set him apart from others in the crowded field. https://t.co/ZAfIgotfKd pic.twitter.com/0Sfj39YT6t

De Blasio coined a nickname for Trump, calling him, "Con Don," and explaining, "Every New Yorker knows he's a con artist...I know how to take him on I've been watching him on for decades."

"Every New Yorker knows he's a con artist...I know how to take him on I've been watching him on for decades." New York Mayor @BilldeBlasio speaks on Trump and says he will fight for working class people. https://t.co/ZAfIgoKQBL pic.twitter.com/cvx00hSQm8

McCray gave her pitch to the rest of America, "I'm here for the same reason Bill is here, because I care about working class people," and cited health care issues, "We've never had a behavioral health system in this country... a rising suicide rate, we've got an opioid epidemic, we've got hospital emergency rooms inundated with alcohol-related visits, and nobody's talking about it the way they should."

"I'm here for the same reason Bill is here, because I care about working class people." @BilldeBlasio's wife @Chirlane tells us what she will do as his top advisor. https://t.co/ZAfIgoKQBL pic.twitter.com/wxvoyBQAoN

When Stephanopoulos asked about the polls showing that a large majority of New Yorkers don't want him to run (76%, according to Quinnipiac), de Blasio proclaimed to not pay attention to polls, "The poll that actually matters is the election. It's not where you start, it's where you end."

#2020 election
#bill de blasio
#de blasio 2020
#donald trump
#election 2020
#mayor de blasio
Do you know the scoop? Comment below or Send us a Tip
A new Gothamist is coming! We’ve moved comments over to our beta site. Click here to join the conversation and get a preview of our new website.