Two teenage girls have been arrested in connection with an assault outside the McCarren Park Pool that was gleefully documented in a series of disturbing cell phone videos. (YouTube has since removed two of the videos.) A Walk in the Park reports that police have arrested a 13- and a 16-year-old, and are pursuing three others. And a third video, which claims to show one of the bullies doing a victory dance after the alleged assault, is still up. It's titled "Alicia fight this white girls," and it's pretty depressing:

The assailants — aged 13 to 17 — followed the girls outside and confronted them on the sidewalk. The first video — entitled, Alicia jus smacked her — shows the horrifying experience. The girls are confronted by a pack of five bullies at the Abate Playground on Lorimer Street in McCarren Park yards away from the pool. It begins with the group standing in a line in a standoff. The video is 49 seconds long.

"Why do you want to fight us," one of the terrified girls asks.

"You need to watch what you say," one of the bullies responds. A 13-year-old girl turns to walk away. She gets about 10 feet away, when the videographer says, "Go get her."

Another girl runs up quickly from behind and curling her arm around from the rear and sucker-punches her in the face, landing a solid blow to her nose. The assailant, whom police say is also 13, runs back to the group laughing. The video ends. 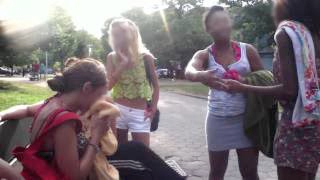 A second video, which lasts for more than four minutes, shows the victim sitting on a park bench holding a towel to her bloody nose as the alleged assailants mock her repeatedly. "Whoa," one of the attackers yells in delight, "you f**ked her up good. You're the baddest bully, you're baddest bully. You got her good." The third video, above, appears to show one of the girls doing a post-fight victory dance, but it's unclear if she was one of the teens arrested. The NYPD press office could not immediately provide any information about the arrests or charges.

On the one hand, this incident could be summed up with the simple headline "Teens Bully Teens" and shrugged off as a "Dog Bites Man" non-story. But it's also another unsettling example of the violence spilling out of the high-profile McCarren Park Pool, which the city spent $50 million to renovate and reopened with great fanfare last month. Many locals were relieved when the pool closed down in the mid-'80s because of the waves of rowdy teenagers it attracted, and some even chained themselves to the construction fence to make sure it stayed closed.

Former Parks Commissioner Henry Stern recently told The Awl that the pool was almost reopened in the mid-80s, but "there was a limited amount of money and there was competition to that money between different councilmembers. Why give money to McCarren if the community was divided? Some people liked it but others, typically older white residents, complained about it. There were racial issues. The neighborhood was afraid of violence and that the police would be unable to contain it."

And Jennifer Badamo, who has lived in Williamsburg for over four decades, tells Capital New York her parents wouldn’t let her to use the pool in the early '80s. "It was a horror show,” she says, recalling how "pool-bound teenagers threw punches and stole bikes as they walked to and from the L and G trains." How did she know they were coming from the pool? "They always had towels draped around their necks."

#brooklyn
#greenpoint
#McCarren Park Pool
#summer
#teenagers
#williamsburg
Do you know the scoop? Comment below or Send us a Tip