Capping off a gangbusters week of widespread adulation following his daring rescue of a woman from a burning building, Newark mayor Cory Booker was awarded the highest honor for valor last night when Stephen Colbert named him his "Alpha Dog of the Week." In the segment below, Colbert salutes Booker for his quick-thinking resourcefulness: "He is so hands on, one time he even pulled himself over and sued himself for racial profiling."

Colbert believes Booker is a perfect example of how cash-strapped municipalities can do a lot more with less. Shrinking government so small you can drown in it in a bathtub is no problemo if you've got a guy like Booker as mayor, because he can fix the plumbing, clean the bathtub, and shovel out the grave all in a single afternoon.

"This big dog has showed us how to neuter big city budgets," Colbert reasons. "Fire all the municipal workers and let our elected officials do their jobs. I mean, why can't New York mayor Mike Bloomberg drive a bus? I bet If he sits on a stack of phone books, he can see over the steering wheel!" Stephen Colbert, you are a disgrace.

And is if the publicity couldn't get any sweeter for Booker, he even made the hallowed pages of the Onion: 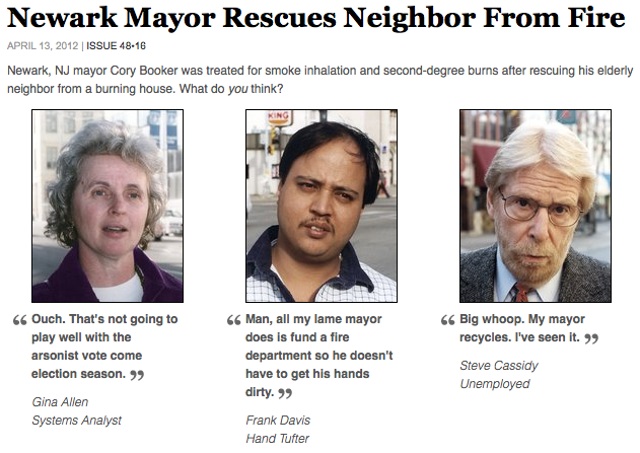 #cory booker
#hero
#mayor bloomberg
#newark
#stephen colbert
Do you know the scoop? Comment below or Send us a Tip