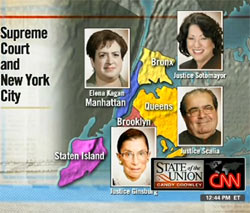 The Daily Show tackled one of the most pressing legal issues that Staten Island is facing (well, besides the horrible number of hate crimes): How the borough is the only one that hasn't produced a Supreme Court Justice. The show's Wyatt Cenac asked Assemblyman Matthew Titone why Staten Island was so great, only for Titone to pause (jokingly?) and then Titone talks about how it's diverse—"Staten Island often is thought of being exclusively Italian-American, having the guidos, but we have the largest Liberian population outside of Liberia."

Eventually, Cenac gathered some Staten Island residents—like a bouncer who's "gotta to see whose rubbing up on the chicks"—and had them decide on Proposition 8's constitutionality. One pointed out during deliberations, "Listen when the forefathers made the Constitution, do you think they knew about the Internet or that we'd be in space? We've got to keep it moving, man."

#daily show
#Justice
#staten island
#supreme court
Do you know the scoop? Comment below or Send us a Tip