A YouTube video of a man being arrested on a nearly empty F train—for allegedly falling asleep during his early morning commute—has been making the rounds on the Internet. According to the NYPD, which confirmed the arrest, the unidentified individual was "occupying more than one seat," which is a violation of the MTA's rules of conduct. 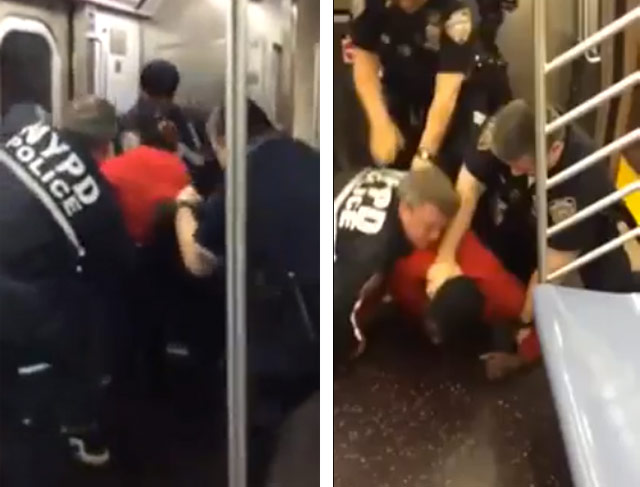 Cops say the incident reportedly took place on May 30th at around 4:18 a.m. on a northbound F train stopped at 57th Street and 6th Ave. Though the video's poster has not responded to request for further comment, the caption claims in shows a man being arrested "for dozing off on his way home from work." In the video, the man repeatedly tells the NYPD he fell asleep, and eventually informs whoever is filming, "I'm coming from work, and they fuck with me because I'm sleeping. And there are bums that sleep on the train."

NYPD says the individual was "committing a Transit Rules and Regulations violation of laying outstretched occupying more than one seat," and was also charged with resisting arrest, obstructing governmental administration in the second degree and violating a local law. The video does show him shoving the cops while they are trying to restrain him and a female police officer appears to hit him with a baton.

It's not unusual for cops to ticket people for taking up more than one seat on the subway, and there have been reports of fines being issued even during late night commutes on empty trains.

As per the MTA's rules of conduct, sleeping or dozing on a train is permissible provided it is not "hazardous to such person or to others or may interfere with the operation of the Authority's transit system or the comfort of its passengers."

#arrest
#f train
#nypd
#subway
#subway seat hog
#original
Do you know the scoop? Comment below or Send us a Tip