The NYPD Internal Affairs Division is investigating the violent arrest of a 24-year-old Staten Island man with severe medical issues, after an officer was caught on video repeatedly punching and using a taser on him while he was in handcuffs. The officer—since identified as Vincenzo Trabolse—was previously named in a lawsuit for allegedly assaulting a man with cerebral palsy.

The video, taken by a distraught family member and shared by the Legal Aid Society, shows officers responding to a call about a domestic disturbance at 24-year-old William Colon's Port Richmond apartment on September 28th. After barging into the apartment, Officer Trabolse seizes Colon, who is 4-foot 8-inches tall and weighs 85-pounds, and tackles him onto a bed.

Trabolse proceeds to punch Colon in the ribs, as a family member pleads with the officer to take it easy because of Colon's medical issues. Despite the relative's warning that "if you tase him he will get hurt," Trabolse pulls out a stun gun and zaps Colon until his body crumples onto the bed.

According to the Legal Aid Society, Colon suffers from several health issues related to diabetes, including Mauriac syndrome, GERD, scoliosis, and asthma. Doctors determined that the taser caused Colon's blood sugar levels to skyrocket, leading to a possible coma, lawyers said. He was hospitalized following the arrest, and Legal Aid says he was shackled to his bed for four days.

"Mr. Colon suffered a brutal attack at the hands of Officer Trabolse, which given our client’s medical condition, could have been fatal for him," said Legal Aid Society spokesperson Redmond Haskins. "After the chokehold death of Eric Garner, we’re appalled to see that there are officers still on Staten Island that employ this degree of brute force at first impulse. New Yorkers deserve better from the Department in these situations."

Officers initially arrived at Colon's home after a neighbor said that she heard arguing coming from inside the apartment. Lawyers say that there was some sort of dispute between Colon and his girlfriend, Lissette Torres, and she had to be escorted out of the house by his brother. Colon claims that he never touched Torres, who now says she was pressured by police to bring charges against her boyfriend.

“They kept trying to get me to write a statement. I said I didn’t want to press charges,” Torres told the Daily News. "They told me I was going to get locked up for vandalizing the house if I didn't. I was frightened. I didn’t want to get arrested. They told me what to write word for word.” She says that in the days since, police have repeatedly visited her home and urged her not to drop the charges. 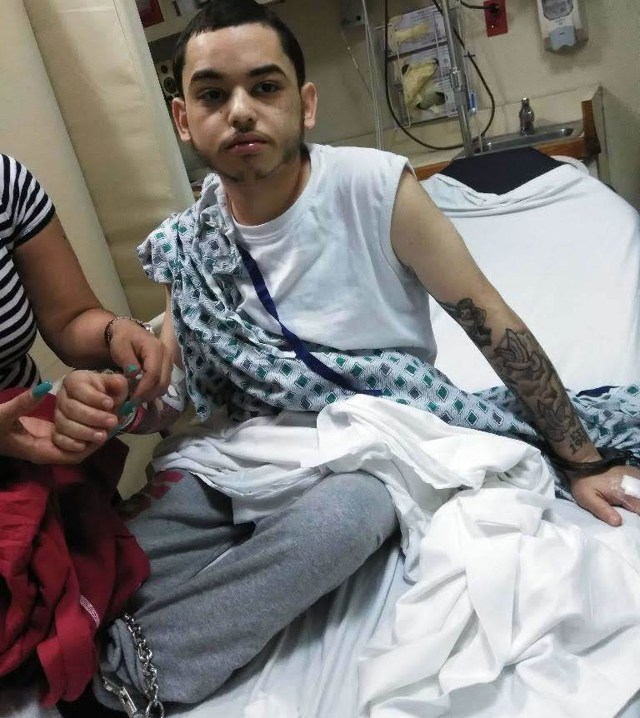 Colon was held in handcuffs and leg shackles during his hospital stay under orders of NYPD. (Legal Aid Society)

Colon, who is accused of punching Torres in the face, has been charged with assault, resisting arrest, obstructing governmental administration, and harassment. The criminal complaint also alleges that Colon can be heard "cursing and yelling" at the police officers—a claim that a Legal Aid Society attorney say is not supported by the video.

Colon's lawyers also note that this is not the first time that Trabolse has been accused of using excessive force on a vulnerable person. A lawsuit filed in June alleges that Trabolse repeatedly punched Dante Daniels, who suffers from cerebral palsy, in the face, then forced his hands behind his back, causing him severe pain. Trabolse is also accused of arresting Daniels on false information that resulted in criminal charges of resisting arrest and governmental administration.

A spokesperson for the NYPD tells Gothamist that "the department is aware of the incident" involving Colon, and that an Internal Affairs investigation has been opened. On Wednesday night, City Councilmember Debi Rose called for a "transparent and swift review" of the "disturbing" arrest. A spokesperson for the Staten Island district attorney's office did not immediately respond to a request for comment.