Video Shows Brooklyn Cops Drove Into Cyclist, Then Lied About It

Security camera footage showing afternoon traffic on 9th Street in Brooklyn suggests an NYPD officer lied on an accident report after his fellow officer ran into a cyclist with his unmarked police car on Tuesday, April 5th. The cyclist, Brooklyn resident Ross Cunningham, told Gothamist he was returning from work when a black sedan made a right turn in front of him while failing to signal. Ross, who was riding in a marked bike lane, was knocked to the ground. When he got to his feet, NYPD Sergeant Peter Villahoz was exiting the car that struck him.

The accusations started flying immediately. "His first question was 'Why were you riding on the sidewalk?'" Cunningham told Gothamist. "Which is a completely insane thing because how would a car hit me if I was riding on the sidewalk?" The cyclist says Villahoz then asked if he needed an ambulance and apologized, despite the fact that Officer Kenneth Maslowski had been driving the car at the time of the collision.

Cunningham was able to acquire security footage of the collision. The NYPD vehicle can be seen hitting him in the bike lane at approximately 20 seconds in.

Cunningham declined the ambulance. "I was very fortunate. I wasn't badly injured," he told Gothamist. However, Cunningham's bicycle was irreparably damaged after being hit and his phone was also cracked in his fall. When Villahoz asked, "What would you like me to do," Cunningham replied "I'd like you to pay for it."

Cunningham attempted to photograph both Villahoz's and Maslowski's badge numbers—a perfectly legal act that was met with disdain. "We're trying to help you, this is an accident," Villahoz said, according to the cyclist.

The officers took Cunningham's driver's license and returned to the unmarked police car to take notes. He was then given the phone number of the NYPD's 76th Precinct office and told to wait for the report to be filed.

When the police report arrived, Cunningham was surprised and angered to read what he claims is a false account of the incident intended to shift the blame away from the officers and onto him. The report alleges that the driver of the NYPD vehicle "was making a legal right turn with emergency lights when cyclist struck right side of vehicle." In the security video, no emergency lights are visible when Cunningham was struck.

The report also claims that Cunningham was not injured in the crash, while he asserts that he did suffer minor injuries, and is seeking medical attention as a result. 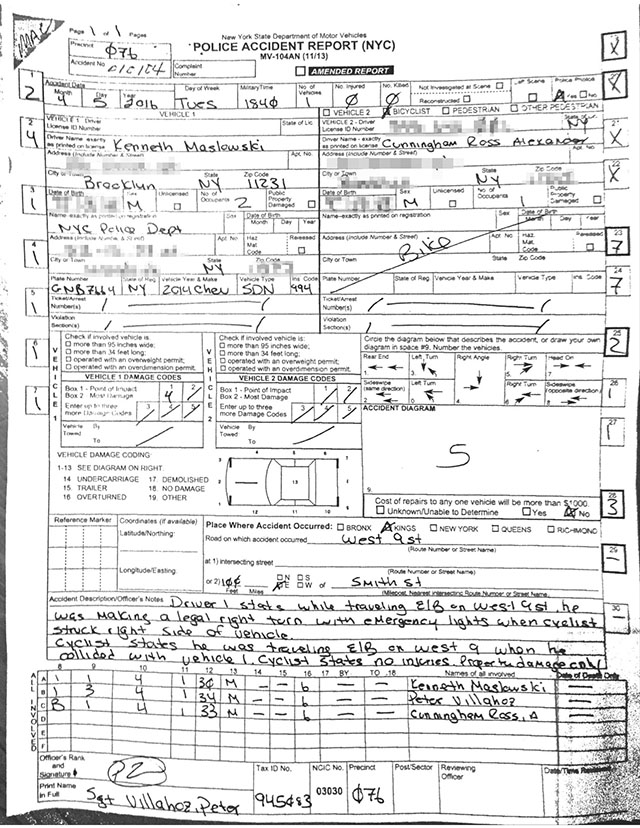 The Accident Report of Cunningham's Collision with an unmarked NYPD car.

The report contains other, less obvious inaccuracies found in the NYPD's internal code for describing accidents. The number "4" in Box 2 beside Cunningham's name indicates that he had been "crossing, no signal or crosswalk" prior to the crash. Cunningham and his attorney, Steve Vaccaro, allege that the box should be marked "5" to indicate "riding along the highway with traffic." Another box is marked to indicate that Cunningham was "not ejected" when, as the video shows, he was thrown from his bicycle.

And despite the arrival of other NYPD officers at the scene, it was Sergeant Villahoz himself who appears to have filled out the accident report. In a letter sent to the NYPD itemizing the accident report's mistakes, Cunningham and Vaccaro outline the inherent problem:

More fundamentally, we are concerned that the report was completed by Sgt. Peter Villahoz, a passenger in the vehicle that struck Mr. Cunningham, apparently without review by any other officer. This is so, even though another marked police vehicle arrived at the scene of the crash and was available to conduct an (at least ostensibly) neutral investigation of the crash.

Allowing an officer to "investigate" and report upon a crash caused by a vehicle he occupied is rife with potential for mistakes or worse. That potential is plainly evident in the attached report.

"This was police officers investigating themselves, and surprise surprise—they really did the most they could to exonerate themselves and minimize the harm that they caused," Vaccaro said. "What I see, however, is that even when police fill out these accident reports for cyclists who've been involved in crashes with private parties, where police don't have any personal skin in the game, they make all the same sorts of mistakes in terms of blaming the cyclist."

Cunningham is holding out hope for resolution and would be pleased to see the NYPD correct the "litany of errors" in his accident report. However, he is prepared to take additional legal action. Vaccaro also told Gothamist he has not ruled out the possibility that the report's inaccuracies are purely accidental, and not a deliberate attempt to misconstrue the facts of the crash.

"This is not my lottery ticket," Cunningham said. "I'm not planning on suing the city. But at this point I just want them to be straightforward. All I want is to be able to go to the doctor, figure out if I'm okay, and carry on with my life."

When asked for comment, an NYPD spokesperson told Gothamist "The collision investigation is ongoing and has not been finalized."

#bike lanes
#brooklyn
#Cops in the Bike Lanes
#cyclists
#nypd
#vision zero
#original
Do you know the scoop? Comment below or Send us a Tip