A drunk man punched a woman in the face at a Williamsburg bar early on Sunday after she told him to stop touching her, according to the victim.

Molly, a graphic designer who asked that we withhold her last name, met friends for a birthday party at the Alligator Lounge on Metropolitan Avenue at around 11:30 p.m. on Saturday night, she said. Before she could get her first drink, she says a strange man "made a beeline for my friend" and tried to kiss her on the cheek, then turned to Molly and said, "Oh, you're so fucking cute" in her ear.

The man's friend steered him away and apologized, saying he was drunk, and Molly went to join a group of a dozen or so people, including her boyfriend, who were singing karaoke in the back. Within minutes, the creep returned, and he grabbed the butt of another of Molly's friends, Molly said.

Molly stepped between them, and the man "did a loop around the bar and basically came back, then talked to the friend that he had originally come up to. She was like, 'Please leave me alone,' and he was like, 'What, you’re too beautiful for me?' He was just getting angrier."

Molly continued, "The third time, he came up to me, stood directly behind me, and put his hand on my waist. I turned around and said, 'Please don’t touch me.'"

Molly's boyfriend was nearby and at this point he stepped in, telling the guy to get away and stop touching her. She says the man demanded that they "take this outside" and told her boyfriend he'd beat him up, as she told her boyfriend it wasn't worth it to fight. Then, out of nowhere, the man socked her in the face, sending her sprawling.

The attacker fled towards Lorimer Street, according to Molly, who spoke to bar staff on Sunday during the day.

Police confirmed the report of an assault at the bar at around 12:10 a.m., but did not have any description of the suspect other than that he is male.

Video provided to Molly by the karaoke DJ offers much more detail. She says the man was in his early 20s, stood around 5-foot-9 or -10, had brown hair, brown eyes, and wore a blue button-down shirt. 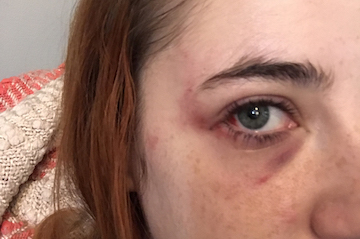 No one seems to have called 911 that night. Molly says that the attack was "very triggering" because of past experience with domestic violence.

"I just wanted to get home and figure out what had just happened," she said. "It was really shocking."

She says she went to the 90th Precinct during the day on Sunday and filed a report, but that the officer she spoke to declined to take a copy of the assault video.

"They said to 'keep it for my records,'" she said.

The NYPD press office did not respond to an inquiry about whether this is standard investigative procedure. An incident information slip provided to the victim indicates that police are looking at the attack as third-degree assault, a misdemeanor.

Molly said she wanted to go public with her experience because her interactions with police so far "led me to believe that this is not going to be investigated." Also, she said, "I know that this kind of interaction of unwanted attention happens all the time in bars. I fell like this guy has done this before, and I just wanted to get as many eyes on it [as possible]."

Alligator Lounge is one of a chain of dive bars that serves free personal pizzas and is owned by businessman John McGillion. The block that the bar is on has been the scene of seven felony assaults, nine grand larcenies, and three robberies since January 2016, according to NYPD data. The building's owner owes an $8,000 fine because the certificate of occupancy specifies that the ground-floor business be a bakery. The Buildings Department uncovered the issue in 2012, but it has yet to be addressed, according to the agency's records. The State Liquor Authority fined McGillion $500 in 2015 for employing unlicensed bouncers at Alligator Lounge, as well as lacking a billiard license.

Other bars in the small empire have also faced complaints about violence and security. In 2008, a patron of the bar Capone's in Williamsburg sued after he said another bar-goer smashed him in the face with a pint glass, causing injuries that required 50 stitches and surgery to correct. That suit settled out of court. Capone's has since closed.

In 2015, McGillion was fined $4,000 for several violations at the Charleston on Bedford Avenue, including employing an unlicensed bouncer. Later that year, an off-duty bouncer at that bar fatally punched a man outside the business. The Brooklyn District Attorney's Office declined to prosecute the bouncer because the victim, Michael Sapp, had been involved in fights earlier in the night and, according to witnesses, had threatened to come back with a gun.

Alligator Lounge manager Lisa Graziano called Gothamist and said, "I am heartbroken that somebody hit a girl. We go out of our way to do everything possible—you know what kind of bar we are. We don't want harm to anyone ever. We take this matter very seriously. I personally will make sure[...]I would love more than anything to find that person."

Grazino said that she believed no bouncer had been told of the attack before the assailant fled out of the bar. However, the victim's understanding is that one of her friends grabbed the man briefly, and people yelled, "He just hit a girl!" as he fled out of the bar and down the street. "That I'm definitely going to look into," Graziano said of the discrepancy. She said she is waiting to get surveillance footage so she can review further.