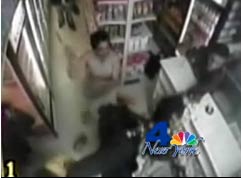 Surveillance video from Munchies Bodega in the Brownsville section of Brooklyn shows, somewhat fuzzily, the circumstances that led to the bludgeoning of 15-year-old Bunkless Bovian by the store's owner ten days ago. The owner, Salah Ahmad, was charged with felony assault and Bovian was placed in a medically induced coma at Brookdale Hospital after the incident.

WNBC obtained surveillance video from the night, showing 19-year-old clerk (and Ahmad's nephew) Hazam Kassim confronting an individual. The argument quickly turned physical and three people were eventually fighting with Kassim who claimed he was slashed with a razor. The video also appears to show Bovian just off-camera and alone with the clerk behind the counter, which was rocked so violently most of the merchandise fell to the floor.

As the melee continues, one can see Ahmad rush to the scene and strike Bovian once in the head before the teenager stumbled out of the store. Initial accounts reported Bovian was confronted by Ahmad over alleged shoplifting; Bovian's parents said their son was arguing with a friend in the store when he was assaulted by Ahmad.

Ahmad's lawyer thinks the police should go after the teenagers, "Mr. Ahmad is not a vigilante. Mr. Ahmed was a victim in this case. And when you look at the entire videotape and you see Mr. Ahmed assaulted even after his nephew was assaulted, he did show remarkable restraint given the circumstances."