A zebra was spotted chasing a pony on the streets of Staten Island this morning, and thankfully the adorable action was all caught on film:

Not much is known about the animal escapees, but according to SILive, the two were seen running through a shopping center parking lot and then down Victory Boulevard. The man who spotted the runaway duo and took the above footage says: "30 seconds later, I saw two men in dark black suits carrying lassos running across the street. I have no idea how it got there... I figured [the men with lassos] knew what to do." Who were these mysterious men? Why were the animals running loose on the streets? Why was the zebra chasing the pony? This story has more questions than answers, so if you have any hot leads, please let us know.

UPDATE: The police reported that the pair were captured and returned home to a petting zoo at Victory Boulevard and Travis Avenue. They also noted that the pony IS A HORSE! And CityRoom points to this photo of the zebra on a leash in the same area, taken a few weeks ago: 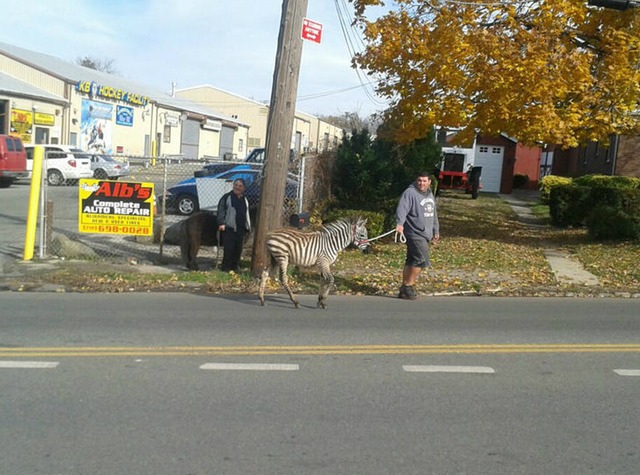