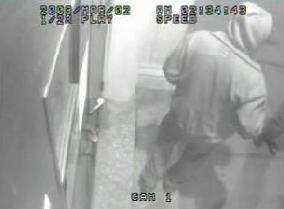 Police are looking for a man suspected of assaulting two women in separate early Sunday morning incidents and released a surveillance video of him.

One of the victims said after getting thrown to the ground she got away and called 911 - only for the attacker to try again as she walked on Bleecker Street. She told the Daily News, "I started walking and calling 911 on my cell ... and he attacked me again...I kind of heard footsteps, and he bounded onto my back and took me down again." She then screamed and the attacker fled.

The suspect struck again, also on Bleecker, also knocking down another woman (the Post reports he "pummeled her and tried to draw her into a basement down an outdoors staircase") but the woman kicked him in the crotch as she screamed. A neighbor who ran out told the News, "The immediacy of her screams was undeniable. After the third scream I ran outside. She was hysterical. Blood was coming out of her nose. Her shoes were off. It's so scary and frightening. There is no one on my block at night. It is very desolate."

There were initial reports that other neighbors heard the first victim's screams but did nothing. Commenters noted the area has many drunken revelers and made suggestions, like "don't just 'scream.' Call out for help. Yell 'help me,' yell 'rape,' yell 'call the police!'" or yell "FIRE" to rouse other neighbors. One said:

"I'll be honest - this happened just outside my apartment and I did in fact hear it. The police came the next day and asked me if I heard anything, and I reported that all I heard were about 5 or 6 screams, and something to the effect of "get away from me." Then it stopped. I hear yelling every weekend night - boyfriends and girlfriends fighting, people just being rowdy, etc. There are two bars right on the block - and at 2:15 (when this happened) there are usually plenty of people around. Had she yelled "rape," or "please help me," I'm sure I would've called 911, or opened my window and yelled something, but instead just assumed it was just the usual. I'm so relieved she got away.

Another commenter who also lives in the area said, "If I called the police every time I heard a generic scream, they'd be responding 3-4 times a night to the false alarm of a drunken idiot." In the meantime, the suspect, described as a Hispanic man, about 5'7" and 140 pounds (sketch) is still at large.

#bleecker street
#crime
#daily news
#If I
#manhattan
#news
#screams
#sexual assault
#sexual attack
#The Police
#west village
Do you know the scoop? Comment below or Send us a Tip