"Sitting in my ambulance and this is what we captured," reads the uploader's caption on this video of a rat rolling some 20 feet on the sidewalk and off the curb, until it lies prone and still. "As your medic I advise you to start doing CPR!" the man videotaping the rat shouts to his colleague, who is enthusiastically taping the rat's plight. A video of a rat rolling along like a child rolling down a hill at recess might be a whimsical escape from the banality of life, if the rat weren't in all likelihood very ill.

Whether it has a severe ear infection or a head injury, laughing—or cackling, as in the case of this YouTube user—at an injured animal deadens the soul. Then again, EMTs see human suffering every day, and you probably have a few sick cat tabs open in your browser anyway.

UPDATE: The video has been taken down, but the above text pretty much sums it up. Here's another screenshot of the rat after it rolled from the sidewalk onto the street, where one EMT continues to take photos while hovering over it. 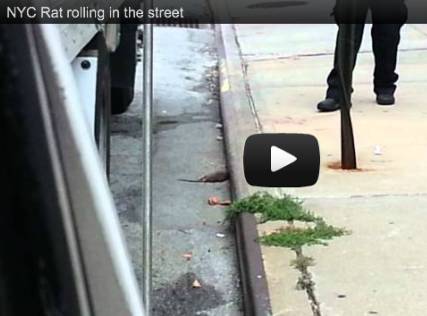