New York State's minimum wage for tipped employees is $5/hour (the federal wage is $2.13), which places the fate of front of the house employees squarely in the hands of mercurial diners. Nowhere is this relationship more perilous than in Times Square, where service employees must rely on the battered consciences of people who just sat through Jersey Boys and simply want to break breadsticks together at an authentic New York restaurant. Say, Olive Garden on the Friday before Valentine's Day.

Like other people who are reminded of ugly truths in public dining spaces, these customers stare at their phones, reach for their water glasses, pretend they won't retell the story of how their meal was interrupted by shouting people. The action was planned by the Restaurant Opportunities Center United.

The New York State Wage Board is currently deciding whether to raise the minimum wage for tipped employees to $7.50/hour, but this system still places the onus for paying service employees a fair wage on customers, who still confuse tipping with "good service," and who should just be paying more for everything on the menu anyway (see: Dirt Candy).

This morning, Walmart announced that they would raise their starting pay to $9/hour, which is $1.75 more than the federal minimum. The company's CEO promised that by April, the average part-time hourly raise at the chain will be $10/hour, and the average full-time wage will be $13/hour. Someday our minimum wage workers will make what they earned in 1970, but that day is not today. 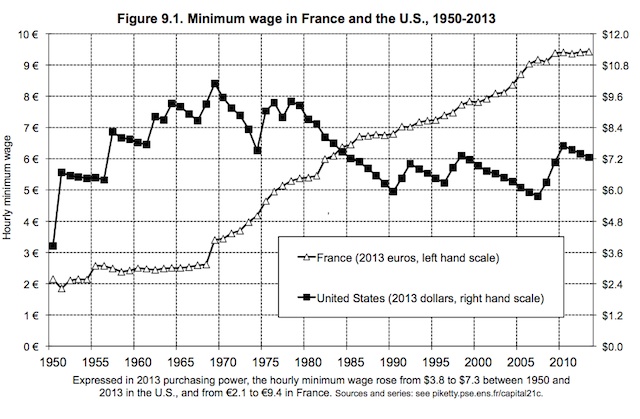 The Walmart CEO's statement makes no mention of increased health care benefits for its employees (they recently dropped 30,000 part-time employees from coverage).

The Walton family is the richest in the United States.