Newly released video from NYC Housing Authority security cameras in Queensbridge appears to show that the NYPD is lying about a fatal crash that killed a Japanese student last year and may have tried to cover up the incident by discarding further video evidence. Although the NYPD has refused to release any video—which they previously claimed shows the NYPD vehicle with its flashing lights engaged—attorney Steve Vaccaro has obtained video from NYCHA through a Freedom of Information Law request.

Some facts are not in dispute. Ryo Oyamada, a 24-year-old student from Japan who was residing near the scene of the crash, was killed by Officer Darren Ilardi at approximately 12:40 a.m. on the morning of February 21st. It's believed he was crossing 40th Avenue near the intersection of 10th Street when he was fatally struck by Illardi, who was on duty behind the wheel of an NYPD cruiser.

NYPD representatives told Oyamada's father, the NY Times, and a local community meeting that Officer Ilardi was responding to a 911 call and had his flashing lights on while driving down 40th Avenue. Witnesses, however, told Gothamist and other media outlets the NYPD cruiser's flashing lights were not turned on until after the collision. 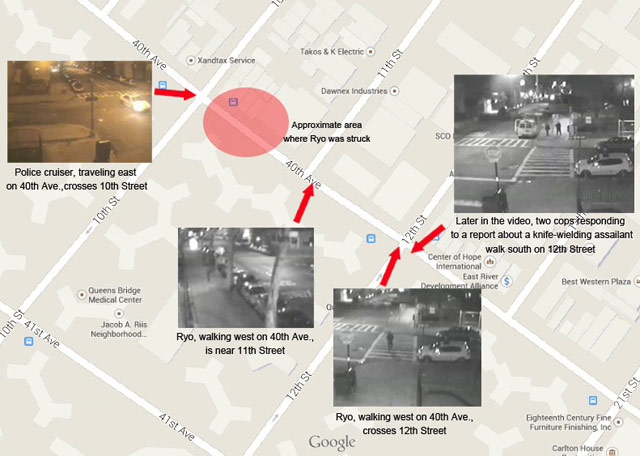 Vaccaro believes the two videos are not synchronized to show the same period of time—it appears that Camera 2 lags at least 30 seconds to a minute behind Camera 1, and the difference may be significantly greater. At approximately ten seconds into Camera 2's footage, Oyamada can be seen walking west on 40th Avenue, about to cross 12th Street. The camera follows him as he proceeds west, finally passing out of sight just before the intersection of 40th Avenue and 11th Street, at 1:07 minutes into the video. Oyamada appears to be walking normally.

Oyamada--10th and 12th Street Cameras from Vaccaro and White on Vimeo.

At this point, Camera 1 shows several people in the vicinity of a bodega on the block where Oyamada was killed. Immediately after the crash, cell phone video showed outraged bystanders at the scene condemning police for running over Oyamada—police ordered these witnesses to disperse, and no first-hand witnesses were interviewed for the police report. (Here is the graphic post-crash video taken by a bystander.)

At the 1:35 mark, the headlights of an NYPD cruiser allegedly driven by Officer Ilardi appear in the upper left-hand corner of Camera 1. It speeds out of the right side of the frame at 1:42, after crossing the intersection of 40th Avenue and 10th Street. (This next block is where Oyamada was killed.) Pausing the video at several points appears to show that the cruiser's flashing lights were not on, which is consistent with witness statements to the media and contrary to informal NYPD statements, as well as the police report.

Officer Ilardi said he was responding to a 911 report of a knife assault somewhere on 12th Street south of 40th Avenue. At the 1:42 mark on Camera 2, several NYPD officers are seen leaving a police van and walking south on 12th Street. Their gait does not suggest any degree of urgency. The 911 call was later determined to be unfounded.

Radio transcripts and other evidence provided by the City suggest that Officer Ilardi was not assigned to the knife disturbance, nor did he tell anyone he was responding to an emergency. In fact, two other NYPD units had already been assigned to the call.

When Officer Ilardi and his partner were interviewed by the NYPD's Internal Affairs Bureau shortly after the collision, those officers "set about changing the testimony of the sole remaining known eyewitness to the crash other than Ilardi—Ilardi's partner, Police Officer Carman," court filings allege.

The most striking aspect of the video released by NYCHA may be what it omits. Camera 1, previously seen sweeping to show a wide expanse of 40th Street—including much of the block where Oyamada was killed—does not sweep back to the east to show the crash scene. Instead, the footage provided by NYCHA ends with the NYPD cruiser passing out of frame.

Asked about the edited video, Vaccaro says, "We surmise that when the NYPD came to [NYCHA] hours after the crash, NYCHA presumably said, 'Okay, here is our footage,' and then preserved an extract of what they supplied to the NYPD. Then, in the ordinary course of their business, they overwrote the video that preceded and follows that extract. We are in the process of confirming this.

"My opinion, as someone who has looked at many videotape extracts taken by the NYPD Collision Investigation Squad, is that this is not normal, that [the NYPD] would cut off the video right before it depicts the crash scene. Usually it's an overgenerous sampling of video." The NYCHA footage in the NYPD's possession has not yet been made public. 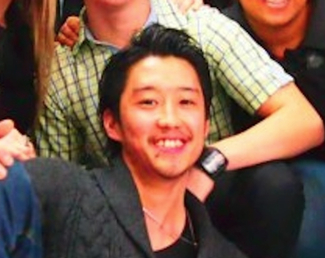 Two prior attorneys for the Oyamada family failed to FOIL NYCHA for the footage. In a statement, Vaccaro says, "The videos were received in highly edited form and have time-stamps that are likely incorrect, we believe that, at a minimum, these videos cast doubt on the public statements of the New York Police Department to the effect that the vehicle that struck Ryo Oyamada had its emergency lights activated."

The police report also says that Oyamada was crossing the intersection at an unspecified point midblock when he was struck. Vaccaro points out that this is in fact legal for pedestrians in New York City on blocks that do not have automated traffic signals bordering at both intersections. On these blocks, including blocks with stop signs, pedestrians are permitted to make mid-block crossings. The block of 40th Avenue between 10th and 11th Street is one such block.

The Oyamada family lawsuit alleges that the NYPD purposefully destroyed evidence, failed to properly investigate the crash, and engaged in a "cover-up." Officers responding to the scene dispersed all eyewitnesses, failed to measure skid marks, and did not check Ilardi's cell phone records to determine if he was using his phone when he struck, according to the lawsuit. Court filings also suggest that Officer Ilardi had a poor driving record, and that the NYPD had failed to retrain or discipline him for it.

At a press conference last year, Oyamada's father said, "I would like to know the truth," and described seeing his son's body: "There was so much damage done, and he was very much coming out from the head. There were so many stitches, Ryo's head was like the head of a stuffed animal."

The NYPD has still not released the Collision Investigation Squad report on the crash, and no city official has ever apologized to the Oyamada family for their loss. However, earlier this month, City Councilmember Jimmy Van Bramer issued a statement saying, "This case is a tragedy. We mourn Ryo's death and while we cannot comment on the ongoing litigation, the family deserves transparency and clarity as to the circumstances of this untimely death."

#cis
#nypd
#pedestrian fatality
#queens
#ryo oyamada
#longform
#original
Do you know the scoop? Comment below or Send us a Tip