Transit advocates hoping to speed up the city's notoriously slow buses have long pointed out that it's often faster to walk (or big-wheel) than to schlep through traffic-clogged streets on a dawdling bus. On Wednesday morning, a few dozen pedestrians tested the theory, power-walking alongside the M14 bus as it chugged along 14th Street from Avenue A to the west side of Union Square. In the end, the bus beat the bipeds, though only by a few seconds.

"For New York City in 2019 to have a bus going walking speed on a good day is really nothing to celebrate," said Tom DeVito, senior director of advocacy at Transportation Alternatives, which organized the contest. He noted that that car traffic was less paralyzing than usual, likely due to school being out this week.

Still, the walkers watched as the rival bus stalled behind construction vehicles, bunched with other buses at its stop, and spent precious minutes waiting for passengers to board. There were multiple police enforcement vehicles along the route—perhaps the result of the Mayor Bill de Blasio's recent vow to finally clear the bus lanes—though none of them did anything about the illegally-parked vehicle with an NYPD placard.

Advocates who want a busway on 14th Street are “racing” the M14 bus. Neck and neck at First Avenue pic.twitter.com/8Ts6gc2tQW

As the group trotted east, the city's long-suffering bus riders commiserated about their daily experiences in transit. Katya Bassil, an Alphabet City resident and mother of a toddler, said that a typical bus ride across 14th Street is "harrowing," routinely taking 35 minutes to get from Sixth Avenue to Avenue B. "We were really excited for the bus lane on 14th Street," she said. "That could've made a major difference."

In preparation for a surge in ridership during the L train shutdown, the MTA/DOT had planned to install a car-free busway on 14th Street for most of the day. But with a full shutdown now averted, the MTA said last week that neither the busway, nor the bus priority on the Williamsburg Bridge, would be necessary.

The authority's own operations staff had warned of just such a scenario, predicting in an internal memo that cancelling mitigation measures could result in "record on-board [subway] crowding," with the potential for 40 minute wait times during nights and weekends, when the L would run along a single track between Brooklyn and 8th Avenue in Manhattan.

Without a seamless bus option, it's easy to imagine frustrated commuters turning to cars, leading to a "full scale L-pocalypse," according to Riders’ Alliance. 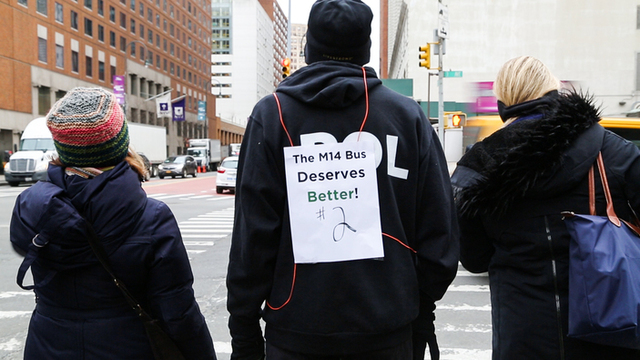 On Wednesday, advocates pointed out all the ways in which the M14 bus—the city's third slowest, and one of its busiest, with a daily ridership of 30,000—would benefit from a dedicated bus-only lane. "You'll notice how the bus pulled away at Third Avenue, and then we caught up to it in two blocks as it got stuck in traffic," said Philip Leff, a volunteer organizer who provided color commentary and post-race analysis. "That's a vivid illustration of the need for busway, because it would've started [at Third Avenue]."

Leff also noted the fare machines that are in the early phases of being installed along the corridor. Though the 14th Street buses will eventually be absorbed into the city's Select Bus Service routes, that's not expected to happen until after the start of the L train "slowdown" in April.

In any case, advocates argue that the SBS buses—which permit off-board fare collection, and which the MTA cites as evidence of their commitment to improving bus service—should not be considered a replacement for dedicated bus lanes. "If we can't have a bus lane that actually keeps cars and trucks out, then what use is it?" wondered Leff.

Though the city has done relatively little to improve bus service as ridership has plunged by double-digits in recent years, the mayor did commit last month to speeding up the city's buses by 25 percent by 2020. But while advocates welcome the ambitious target, they see the 14th Street bus lane fight as both a test of the MTA’s L-train preparedness, and as a sort of referendum on whether the city is finally serious about prioritizing bus riders over private motorists.

"The city is growing, our transportation system is crumbling," DeVito told Gothamist. "The idea of not moving forward with street infrastructure that would be a game-changer for transit riders is appalling."

Neither the MTA nor the Mayor's Office immediately responded to a request for comment.