City Councilman Simcha Felder's proposed legislation to fine people $1,000 for feeding pigeons has struck a nerve. Felder and other elected officials claim that pigeons' poop is harmful to New Yorkers and, therefore, various ways to limit pigeons' eating and procreating should be explored. But some pigeon lovers are unhappy with the level of vitriol directed at the city's unofficial bird. Hence the video from Animaniacs, "Goodfeathers" (it's 10 minutes, so settle in to watch!).

Members of the New York Bird Club and Pigeon People, as well as other pigeon-supporting groups, met last week to discuss how to fight City Hall. The NY Times noted that one NY Bird Club member made the point, "A pigeon has never attacked a person. A rat has." And what about pigeons' importance in helping the U.S. Army during World War I? 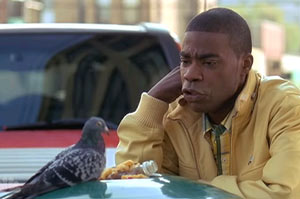 When City Council Speaker Christine Quinn referred to pigeons as "flying rats," the Post reported that Urban Wildlife Coalition founder Johana Clearfield sent Quinn a letter calling her "clueless...pigeons have nothing in common with rats." And Clearfield also wrote that saying "flying rats" was an "epithet... much like the n-word." Also, the Department of Health doesn't consider pigeons a public health nuisance.

Still, many groups, like PETA, the ASPCA, and Humane Society, support birth control and/or curbs on pigeon feeding. Maybe they can ask Tracy Morgan to film PSA's as Tracy Jordan, who on 30 Rock told a pigeon, "Pigeon, you should stop eating other people's old french fries. Have some self-respect! Don't you know you can fly?"