As the NYPD is caught in the controversy of a police officer apparently shoving a Critical Mass bicyclist to the ground for no reason, another disturbing video has surfaced showing a police officer beating a man repeatedly with a baton. 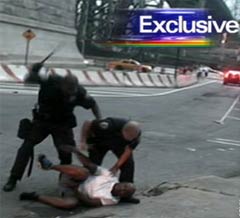 WNBC aired the footage which shows Brooklyn resident Michael Cephus being struck on Delancey Street in Manhattan earlier this month. According to police, Cephus was allegedly drinking and had swung at police officers with an umbrella, hit two cops with his fists and had refused to be handcuffed." The tape shows police officer Maurice Harrington beat Cephus while another cop handcuffs him. Cephus was charged with assault, criminal possession of a weapon (the umbrella), menacing and resisting arrest.

However, Cephus denied drinking and the charges and told the station, "I would never strike an officer. Why should I get beat up? Why should anybody get beat up?" And he said to the Post, "I was with some friends at a cookout.I stepped out of the park to get some ice. The officers told me I couldn't return because they said I had alcohol. I told them it was only ice. They thought I was drunk and they just came at me. They started swinging and hitting me with the batons."

Harrington, who works out of the 52nd Precinct in the Bronx (he was on the Lower East Side working a July 4th detail), was placed on modified duty. The Patrolmen's Benevolent Assocation's Patrick Lynch said Harrington's actions were necessary, "Partial video never tells the whole story. That person was not only not complying but gripping in a death grip that baton. That's a danger to the police officer."

#baton
#nypd
#police beating
#police brutality
#resisting arrest
#video tape
Do you know the scoop? Comment below or Send us a Tip