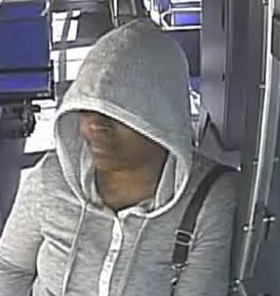 The police are looking for a woman who allegedly attacked an MTA bus driver in the Bronx yesterday afternoon.

According to the NYPD, just before 4 p.m., cops responded to a 911 calls about an assault on a BX5 driver. The victim, a 52-year-old man, was slashed in the forearm after he discharged his passengers at Westchester Avenue and Southern Boulevard. The driver is in stable condition.

The suspect is described as a woman last seen wearing a grey hooded sweatshirt and grey sweatpants. This attack comes two days after a bus driver was punched and robbed at the end of her route on the Lower East Side.

#attack
#bronx
#bus driver
#MTA
#slashing
Do you know the scoop? Comment below or Send us a Tip
A new Gothamist is coming! We’ve moved comments over to our beta site. Click here to join the conversation and get a preview of our new website.