Video, Map, Renderings: What NYC's 2012 Olympics Dream Would Have Looked Like With the London 2012 Olympics getting ready to take over the world, let's look back about NYC's attempt to land the 2012 games here. Mayor Bloomberg proposed a new Shea Stadium—because Assembly Speaker Sheldon Silver killed plans for the West Side Stadium right before the winning bid was announced. Remember the West Side Stadium, the Jets' hope to bring football to Manhattan? RIP, West Side Stadium. 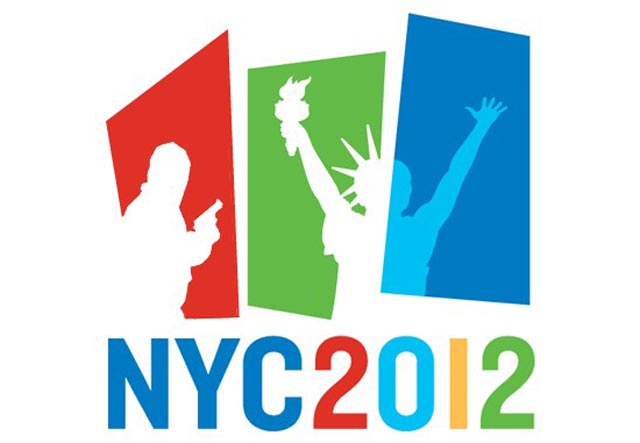 Bloomberg worked really hard to secure support for a 2012 NYC bid—Condolezza Rice got involved and the Mayor enlisted stars like Matt Damon and Meryl Streep to dazzle the International Olympic Committee officials—because his administration estimated that the "Games would spur the largest single investment in parks, sports and recreational facilities in the City's history and bring a regional economic impact of over $12 billion and create over 135,000 jobs." New Yorkers themselves were pretty tepid about the proposed games and we spoofed the logo (right).

The city said that 12,000 cops would be assigned to the games, while Olympics athletes would travel in special Olympics-only bus lanes. Each borough would be a different Olympic color and the athletes would have had a parade on Broadway. Also, beach volleyball in Williamsburg! Triathlon in Central Park!

Anyway, NYC lost the bid to London on July 6, 2005; in November 2011, many people, including Bloomberg, admitted not getting the Olympics was a good thing.

Check out this map of where events would have been held (this would have depended on the West Side Stadium being built):

And here's a video showing renderings of the city's bid: