Video: Lara Logan Speaks Out About Sexual Assault In Cairo

CBS News reporter Lara Logan is speaking out about suffering a "brutal and sustained sexual assault" while covering the fall of Egyptian leader Hosni Mubarak in February. Logan was separated from her crew when a mob of 200 grew unruly; she told the NY Times that a group of men groped her, tore off her clothes, and beat her, "For an extended period of time, they raped me with their hands." 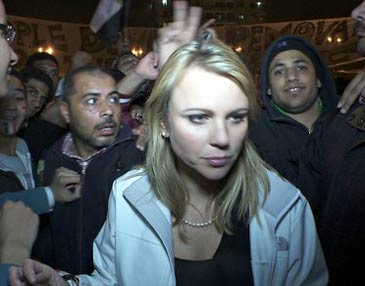 In an interview that will air on 60 Minutes on Sunday, she tells Scott Pelley, "There was no doubt in my mind that I was in the process of dying. I thought not only am I going to die, but it's going to be just a torturous death that's going to go on forever..." Apparently she was separated from the crew for 25 minutes (one report had suggested that she was beaten with flag poles) and she says thinking about her two children inspired her to survive the attack. A group of Egyptian women and soldiers rescued her from the mob, and she was flown out of Egypt the next day.

CBS News chairman Jeff Fager told the Times, "There’s a code of silence about it that I think is in Lara’s interest and in our interest to break." Logan says she didn't realize that women suffered so much abuse in Egypt, "I would have paid more attention to it if I had had any sense of it. When women are harassed and subjected to this in society, they’re denied an equal place in that society. Public spaces don’t belong to them. Men control it. It reaffirms the oppressive role of men in the society." She said of her attackers, "What really struck me was how merciless they were. They really enjoyed my pain and suffering. It incited them to more violence."

Logan said she wouldn't discuss the attack again after the 60 Minute interview is shown, explaining to the Times, "I don’t want this to define me." But she acknowledged that a big part of her recovery was the outpouring of support from colleagues and strangers:

Among the letters she received, she said, was one from a woman who lives in Canada who was raped in the back of a taxi in Cairo in early February, amid the protests there. “That poor woman had to go into the airport begging people to help her,” Ms. Logan recalled. When she returned home, “her family told her not to talk about it.”

Ms. Logan said that as she read the letter, she started to sob. “It was a reminder to me of how fortunate I was,” she said.

#60 minutes
#attack
#cairo
#cbs news
#egypt
#lara logan
#sexual assault
Do you know the scoop? Comment below or Send us a Tip