The serial robber who has been targeting six businesses—and threatening employees with a knife— in the East Village, Nolita and SoHo is behind yet another incident, according to police. And this time, he got away with $1,000.

The latest robbery took place at Wine Therapy, located at 171 Elizabeth Street, on Friday, February 27th at around 9:43 p.m. Two suspects entered, brandished a knife and took $1,000 in cash and fled. Video shows a store employee handing over the money while the suspects hover:

Here's how the police describe the earlier robberies (one suspect is involved in all seven incidents, while a second male suspect was involved in the February 27th robbery, as well as the first one on January 23rd): 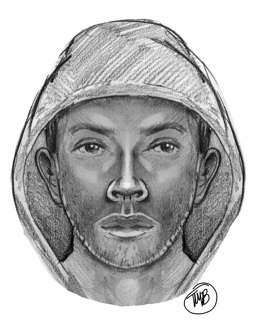 Sketch of suspect involved in all seven robberies (DCPI)
1 On January 21, 2015 at 1730 hours, two suspects entered the Goldwater Boutique at 84 East 7th Street, approached an employee, and demanded money. The employee complied, and handed one of the suspects $240 cash. The other suspect then waited outside the store. Both suspects fled the location and the victim was unharmed.

4 (5th Pct): On Friday, January 30, 2015 at approximately 1940 hours, the suspect entered a clothing store located at 251 Elizabeth Street, but fled without any proceeds.

Anyone with information in regards to these incidents is asked to call the NYPD's Crime Stoppers Hotline at 800-577-TIPS. The public can also submit their tips by logging onto the Crime Stoppers Website at WWW.NYPDCRIMESTOPPERS.COM or texting their tips to 274637(CRIMES) then enter TIP577.

#east village
#nolita
#robberies
#serial robber
#soho
Do you know the scoop? Comment below or Send us a Tip