Everyone loves to throw tomatoes at America's rich pumpkin clown, and Jon Stewart is no exception. The Daily Show host was giddy in describing Donald Trump's entrance into Election 2016 as "a gift from heaven." He said of Trump's Trump Tower announcement, "A billionaire vanity candidate...taking the escalator to the White House! ...I haven't seen an entrance that majestic since my friend met me at the Gap after grabbing an Orange Julius."

Of course, Stewart had to tackle Hillary Clinton's and Jeb Bush's speeches, as the "nutritious" part of his meal before tackling his dessert—The Donald. Before the part of the Trump segment, Stewart exclaimed, "Let's dance, clownstick!"

Trump's words were, he said, "over half an hour of the most beautifully ridiculous jibber-jabber ever to pour forth from the mouth of a batshit billionaire... America's id is running for president. Trump is the part of your brain that's like at 3 a.m. going, 'let's go take a shit in a mailbox." 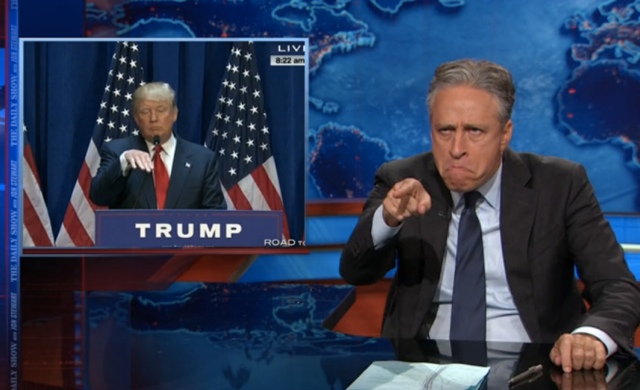 Finally, Stewart expressed his gratitude, "Thank you Donald, thank you Donald Trump, for making my last six weeks my best six weeks. He is putting me in some kind of comedy hospice where all I’m getting is just straight morphine."

#daily show
#donald trump
#election 2016
#Jon Stewart
Do you know the scoop? Comment below or Send us a Tip