Video: Is It Wrong To Kick A Rat?

Rats are filthy vermin which this fair city expends considerable resources trying to exterminate using various poisons and dark sorcery, and yet it is still hard to watch this video without feeling an unexpected twinge of empathy for this unlucky rodent. This is a tough town, and you can never let your guard down, not even when you're just chilling on a subway platform nibbling on pieces of old chewing gum. Someone, somewhere, is always poised to wander up and kick you in the head.

Vincent Gaynor, the commuter who captured this Very New York Moment, tells us, "I at first felt shocked about it, but after working at Tower 1 so long you become numb to these types of things. The whole city is rat infested and many people do not realize just how many there are living amongst us!"

Yes, rats are everywhere, but does that mean we should go around kicking them in the head? Isn't there something cruel and barbaric about that, not to mention all the rat cooties you'll be tracking into your apartment. On the other hand, if every New Yorker stomped just two rats a day, our troubles here would be over very quickly. And yet, could you really bring yourself to kick this poor innocent creature that is simply living according to his nature? 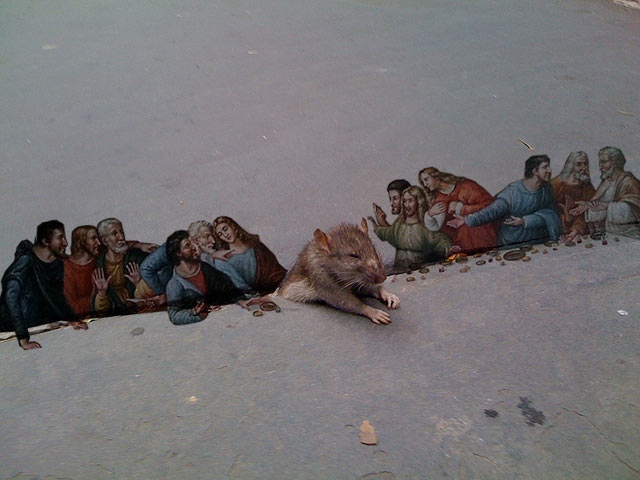 #rats
#subway
#original
Do you know the scoop? Comment below or Send us a Tip