Video: In The Mosh Pit With Thousands Of Hasidic Rabbis I was pressed in the middle of a mass of sweating, dancing Hasidic men during the final hour of an exuberant banquet for Chabad emissaries—the Orthodox Jewish group's term for its missionaries—when my guide and I became separated. We had both been squeezed into the surging crowd when diverging currents of humanity suddenly swept us off in opposite directions, and it took long moments of straining back to breach the walls of suited shoulders and be reunited. My guide, a Chabad organization spokesman, yelled in my ear asking if I was all right. I told him it was fine—I had been in a few mosh pits before.

The banquet, inside the cavernous South Brooklyn Marine Terminal in Sunset Park, was the climax of a long weekend that saw some 4,400 rabbis and 800 other Hasidic Jews converge on Brooklyn from across the country and as far afield as Ghana, Thailand, and Shanghai. The emissaries gather once a year on the religious movement's adopted home turf and spend their days catching up with fellow rabbis; attending workshops on such topics as how to comfort a mourning family; visiting the grave of the late Chabad leader Rebbe Menachem M. Schneerson in Cambria Heights, Queens; and engaging in what press releases describe, accurately, as "spirited Hasidic dancing."

The dance party hype starts to build after the main course, when a rabbi at the podium starts shouting out various countries. Some, like Latvia, home to three emissary families, get sporadic claps. Big guns like Russia get several bars from the 23-piece horn and strings ensemble while their stats—Russia home to 167 emissary families; the outpost established in 1988—flash on a Jumbotron as a crane-operated camera pans the cheering tables. There are 86 countries to get through, so by the time the U.S. is called out, people are already plenty juiced, and starting to link arms and get the pit going. 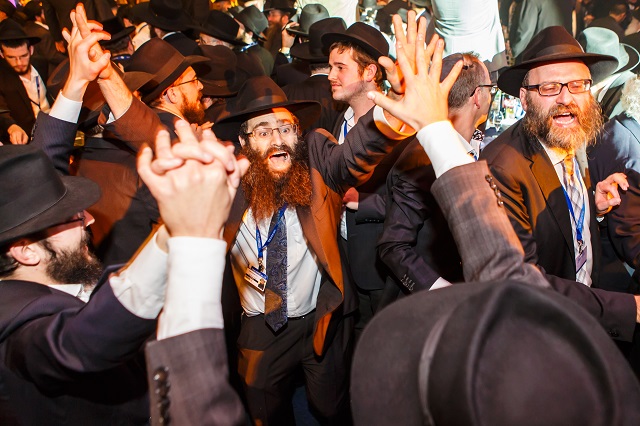 This was the place to see some very happy men. (Eliyahu Parypa/Chabad.org)

Then the band, headed by singer Benny Friedman, kicks into high gear. None of my handlers could say much about the music other than that it's Hasidic, with some roots in Russia, and that some songs have no words. I'm told one that goes, roughly, "Hay ay, ha hay, ya ya ya," is called something that, translated from Yiddish, comes out to "Happy Song." And man, are these guys happy—especially considering they're at a party where all but three of the thousands of attendees and workers I encountered were men.

Dancing among the tables and chairs, there is much more shoulder gripping, jumping for joy, and Riverdance kicking. There isn't much opportunity for talking in all this. From a temporary perch on a chair, I can see above the line of hats and discern the room's colliding hurricanes, the circles of black hats growing as the men in them latch onto new members, and becoming moving parts in big whirling gear systems as ambitious thinkers form conga lines and try to wrap around whole quadrants of the room.

Circulating this way, rabbis tend to bump into people they know. Here was a friend my guide knows from growing up in Brooklyn, but who now lives in Argentina. There was the contingent from the University of Southern California. In the social blender, greetings consist of kisses on the cheek, wild-eyed yells, and emphatic hand-holding.

It goes on like this for more than a half hour, as brave caterers bus plates and disassemble tables amid the throngs, and then it's over.

Of course, there was a whole dinner before this, during which we learned why exactly this was all happening. Chabad spokesmen insisted that the emissaries are not purely interested in collecting souls (they only proselytize to Jews, of course) but rather in the promulgation of mitzvahs, or holy-type good deeds. Emissaries are male rabbis and their wives, with each member of the couple also called a "co-director" (the women emissaries get their own weekend gathering in February). These young families fan out to more and less Jewish parts of the world to establish what Berlin Rabbi Yehuda Teichtal calls "Jewish infrastructure."

Teichtal grew up in Crown Heights and moved to Berlin with his wife in 1996 to expand the Chabad community there. When they first arrived, there wasn't so much as a place to buy kosher food, and the "darkness" of the Holocaust still cast a shadow. "We'd meet [a non-Jewish German] over 60 and say, 'I wonder where you were during [World War 2],'" Teichtal remembers. For the first few years, he and his wife would fly in much of their food, or drive it in from Belgium, and they felt they had to home-school their kids.

Now Germany's Jewish population is nearly 10 times what it was at the time the Berlin Wall fell, there are three synagogues, a Hasidic elementary school, a Hasidic high school, and a just-opened kosher supermarket. Teichtal estimates there are 18,000 Jews tapped into the deniomination in Germany, but he maintains that he's not keeping score. "We don't court people," he said. "We court deeds."