Video: I Got Leech Therapy In Brooklyn & A Free Maxi-Pad, Too

Andrew Plucinski doesn't work in what one normally considers an "office," but then again, he's not what one typically considers a "therapist," either—the focal point of Plucinski's practice is a jar filled with shimmering, squirming leeches. Besides, he could have been working out of a cardboard box on the side of the BQE. The moment I heard there was a guy in Greenpoint curing aches and pains using nature's most fearsome worms, I knew I was giving it a try.

The "Silesian Holistic Center" consists of a sectioned off portion of Plucinski's Norman Avenue apartment. Upon arrival, I was startled and slightly disconcerted to find that the center lacked the soothing accouterments of a normal waiting room—insipid water colors, a tableful of rumpled Popular Mechanics. Instead there were piles upon piles of stuff...a woman's shoe (just the one) beneath a chair, a pair of skis leaning against the wall, and many, many bags of maxi pads piled on a shelf. (These did turn out to have a tangentially related medical purpose. Keep reading.)

Plucinski himself is a robust man who looks to be in his late 50s or early 60s. His unlined face and clear eyes came as a comfort. No one wants a haggard leech therapist.

The proceedings were alarmingly straightforward. I filled out no paperwork, and Plucinski did not trouble me with a deep probe on my medical history. I didn't come in with any particular malady in need of healing, though I had a little soreness in my shoulder, maybe from sleeping?

That's not really the thing for leeches, Andrew said flatly. OK then! A face treatment was an option, but you only get one face in life. He pointed to the top of my hand, the fleshy part between my thumb and forefinger, identifying it as a classic acupuncture pressure point. (The "hegu," it turns out, which apparently reduces pain, "particularly headaches and dental pain.") I have two hands. The right one was more important, but I decided to sacrifice it anyway, rationalizing that if it calcified into a claw I could at least negotiate a few days off work.

Leech Therapy from Gothamist on Vimeo.

I'd been so busy boasting about my forthcoming leeching experience to friends and total strangers it hadn't occurred to me to be scared, until I saw the Leech Jar. I'd never seen a leech before, nor had I ever really given them much thought. When I swim in lakes, I'm far more terrified of a rogue great white or a REALLY Largemouth bass eating my legs. I've seen Stand By Me, but my thoughts during that time mostly concerned whether Corey Feldman was weird looking as a child or whether it set in later in life.

Did you know leeches can leap? I suppose I'd expected something more sluggish (ha) but then again, if I hadn't eaten in six months I'd be pretty rambunctious, too.

I was again presented with two choices: Plucinski could grab a leech for me, or I could dip my hand into the tank and let it choose me. This was obviously the more badass option, and I tell you, I wanted to do it. I really did. But the moment my hand was five inches from the water, some deep-seated survival instinct kicked in (where was that when I signed up for this?). "On second thought you just go ahead," I breathed.

Plucinski dipped his hand into the jar, and the leeches lunged. He transferred the winner to my hand, where it spent a moment investigating the landscape, a slimy legless bloodsucking dog sniffing around the yard, as it were. When it took hold, I knew it.

Plucinski mentioned that one client had likened the sensation of the leech biting down to that of a tattoo needle. I don't have any tattoos, but the comparison seemed reasonable. As it locked its 360 tiny teeth into my flesh, the pain grew. At no point was it ever severe, but it was startling, since to the naked eye the leech didn't even have a face—where could it possibly keep all those teeth?

We made small talk for the next 15 minutes or so, me asking more questions, trying to act real chill like there wasn't a Nightmare affixed to my hand. Just one finger over from where the leech was doing its work sat my grandmother's ring. A warmhearted woman who loved making me cookies and spent years singing in a community chorus, I couldn't imagine she would have been thrilled by her progeny's choice of Wednesday night activities.

Plucinski is not without his detractors. I'd received an email from one very concerned leech therapist in Ireland named Colin Gerard, Chief Hirudotherapist for the European leech training body Hirudo Health. He was somehow familiar with Plucinski's practice, and penned a nearly 1,000 word missive criticizing nearly every aspect of the way things were run at the center, asserting that Plucinski has no "medical, anatomical, physiological, pathological or pharmacological training," among other things.

"As one who teaches and practises hirudotherapy across the continent of Europe, I am personally alarmed at the publicity this individual receives and the potential risks he poses to the health and welfare of members of the public in Brooklyn," Colin wrote. I printed the email and, after our session was over, read excerpts of its contents to Plucinski, who was appalled. Among the charges leveled were that Plucinski did not perform a satisfactory background check on the health of his patients before beginning the treatment. Plucinski denied that that was true, and said he spent an hour assessing each patient before any leech was permitted to touch down.

Plucinski did tell me that leeches can cure EVERYTHING (except AIDS), but there's a lot of evidence to suggest this isn't true. As if on cue, at one point he paused our conversation to open the door for his girlfriend, who he explained was "sick like a dog."

Colin's email also asserted that hirudotherapy on its own actually has very few curative effects. "The therapy in the main, treats symptoms, not the underlying condition," he wrote. Plucinski dismissed this as well. "I am not diagnosing anything," he said. "I am just asking 'What's the pain, where is it coming from,' and I am detoxifying the body. He's not a hirudotherapist, he's probably a doctor, because he's vicious," he laughed. "I don't think he's well-informed."

Plucinski also cautioned me not to "put any other people against my words who are not trained professionals," like the author of this Guardian piece, with whom Plucinksi seems to hold a deep and abiding grudge. Angry that a doctor consulted for the story had expressed concern about bacteria, he retorted, "Yes, leeches have bacteria. She has bacteria, too."

"Does that mean we should kill her because she's working with bacteria?" he fumed. "I mean, how stupid it is to say something like this. She has no foggy idea what leeches are about."

With a dab of rubbing alcohol, the leech was finally removed. The mystery of the many maxi pads was explained when he procured one, cut it in half, and taped it to my hand with masking tape. For after care, he instructed me to leave it on overnight and to not get it wet. "But, I can't wash my hands?" I asked. "Wash below that part." He also told me not to drink any alcohol, which I wish I'd been apprised of beforehand. It was a Wednesday. What else was I going to do? I mentioned to Plucinski that he'd ruined my two favorite activities (drinking, not wearing a maxi pad on my hand) but he seemed unperturbed.

I ripped the maxi pad off the second I got outside, but realized pretty quickly I may have acted too soon. The red lymph bubbled at a rate faster than I'd expected, and before I knew it, it was streaming down my arm. I went to a nearby Rite Aid, and asked an employee for a paper towel to mop up the mess so I could apply the Band-Aids I'd just paid for.

"Oh my god, are you alright?" she asked, visibly rattled. I'd always longed for such an injury, one that inspired sympathy in strangers without any actual pain, but I found myself embarrassed. "I'm, uh, I have..." I trailed off. The truth would have upset her far more than any lie. After all that, I needed a drink. I slapped the Band-Aid on, and went straight to the bar.

On Saturday, I woke up with a 101 degree fever, which ultimately advanced to 103, and stayed there for several more days. It was as sick as I've been in a long time. I'm not saying it's related, but as I flopped miserably around in my bed, my mind couldn't help but cinematically repeat Plucinski's words about his girlfriend being "sick as a dog."

On Tuesday I received an email from Plucinski asking how I enjoyed the treatment. I told him that I'd come down with the flu shortly afterward. I also mentioned that the bite wound, which a few days ago seemed nearly healed, had puffed up and become itchy, not unlike a mosquito bite. "Am I going to die?" I asked in closing.

His response was this:

Hi Lauren, What a coincidence, lol…but I did not tell you; you will be immune - that is your diet. I told you, you will be energized. The flu - it is different story. You should call me the first minute you felt something is going on. There are old simple remedies for it. If you let it go down to your lungs, come for leeches. If not, stick to the garlic.

Puffy wound; flu decrease your immune system, so the puffiness. Smear over the wound slice of lemon OR your own urine. It will go away soon.

If you'd like to enjoy the therapeutic benefits of hirudotherapy, Andrew Plucinski is the only one to exclusively offer such services in the city. Enjoy. 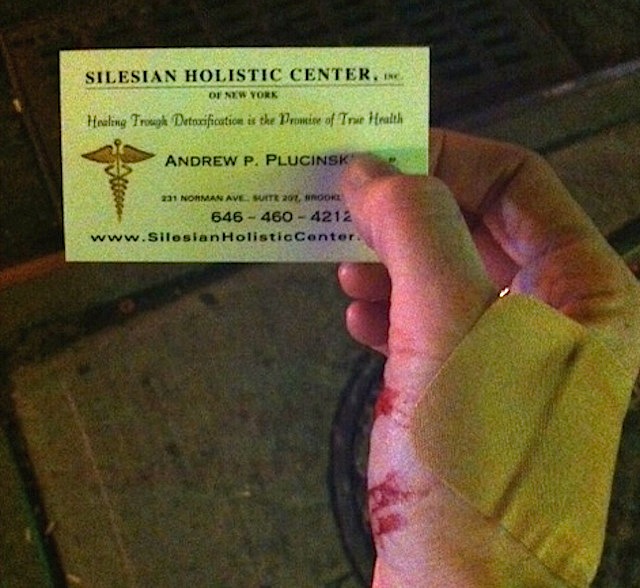 #green point
#leech therapy
#leeches
#longform
#original
Do you know the scoop? Comment below or Send us a Tip