If you stopped every time someone veered into your path while you're biking over the Brooklyn Bridge, you'd never make it anywhere. The trick is to keep one hand on your bell, the other on your brake, and your eyes scanning near and far for tourists traversing the bike path backwards, forwards, sidewise, and sometimes hopping, to get the perfect shot. Not to mention whole church groups tottering on rented bikes, and Kryptonite-chain-wearing road warriors blazing paths through the fleshy masses. And when someone is coming the other way on a bike, some combination of eye contact and course adjustment is typically necessary to apportion the slivers of space between the lines.

Last Wednesday, I touched my brake as I came coasting down the slope of the span on the Manhattan side, towards a woman meandering slowly in the other direction on a Citi Bike. She was taking up most of the lane in both directions. I slowed, but focused mostly on sounding my bell, sure that at any moment it'd reach her ears and she'd correct course as all cyclists do dozens of times during a given trip across. When I got within 10 feet, I saw the phone in her hand and her eyes locked on it, and I realized too late that she wasn't fixing this.

The crash brought us to a halt, my thigh and wrist absorbing the impact of her handlebar and front rack. Tourists paused momentarily on all sides of us, then seeing no blood, continued on their way. The Citi Bike rider giggled, and I asked, in less polite terms, what was wrong with her. When she didn't respond and started to get her footing on the pedals again I told her to stop looking at her phone and pay attention. "I wasn't looking at my phone," she managed. "I..." she trailed off as she pedaled away, still laughing to herself, still clutching her phone. 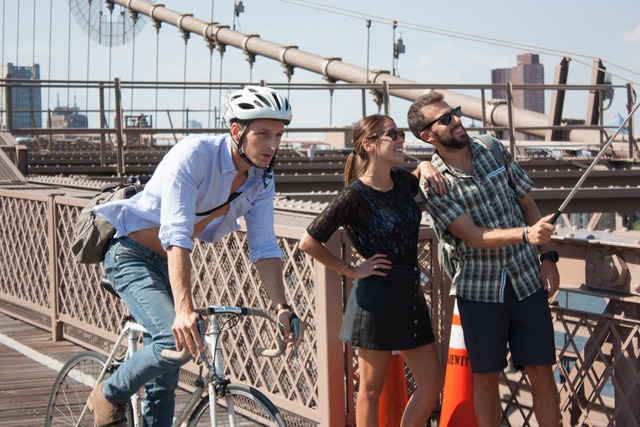 The Brooklyn Bridge promenade was always dicey back when I used to ride my bike over it daily to get to work near City Hall. In good weather, the bridge is full to bursting with tourists on foot and rented bikes. Walking, even the seasoned New Yorkers who know to stay on the pedestrian side can be sent veering into bike traffic by a family stopped for a series of group portraits.

On bike, some regular commuters have self-radicalized. One time I saw a cyclist announce his missile-like trajectory with a commercial-grade air-horn that parted the sea of tourists like panicked cattle. Another commute found me being tailgated by a would-be Lance Armstrong who, when he found an opening to pass me, said, "Quit using your bell. Bikes come with brakes not bells for a reason." We were coming up to another narrow spot in the crowd near the beginning of the cement ramp on the Manhattan side, and, faced with what I can only assume is an unbearable degree of embarrassment at having to return to his spot behind me, the guy tucked himself tight over the frame of his bike and threaded the needle between two pedestrians up ahead, with all the subtlety of a spandex-wrapped bowling ball.

As antisocial as all these behaviors are, the problems of the Brooklyn Bridge promenade—it's too stressful for tourists to enjoy, and too jam-packed with people taking leisurely jaunts for efficient bike commuting—come down to design. The path is just too damn narrow. So when I heard that the city Department of Transportation is commencing a study of how best to expand the path, I felt about like Councilwoman Margaret Chin did when she heard the news.

"It's about time," said Chin, who first proposed that the city look at an expansion along with two other Councilmembers back in 2012, around the time I changed jobs and stopped crossing the East River except for emergencies.

Since then, selfie sticks and the light-speed improvement of cellphones' video streaming capabilities have opened up a whole new world of hazards on the deck the DOT has taken to calling "Times Square in the Sky." In that time, the bridge has also grown more crowded, increasing its load of pedestrians from 4,000 on an average weekday to 10,000, and its cyclists crossing from 3,100 to 3,500, according to counts the department performs each May. On weekends in 2015, counters logged an average of 1,900 pedestrians crossing per hour.

Also, starting in the summer of 2014 when German artists replaced the American flags atop the bridge's towers with white flags of surrender, NYPD Interceptors parked at either end of the cables have joined food and souvenir vendors as semi-permanent fixtures in the obstacle course. In 2015, the city built cages around the bridge cables after one too many tourist wound up on the cover of the tabloids after climbing to the top and taking a selfie for the ages. 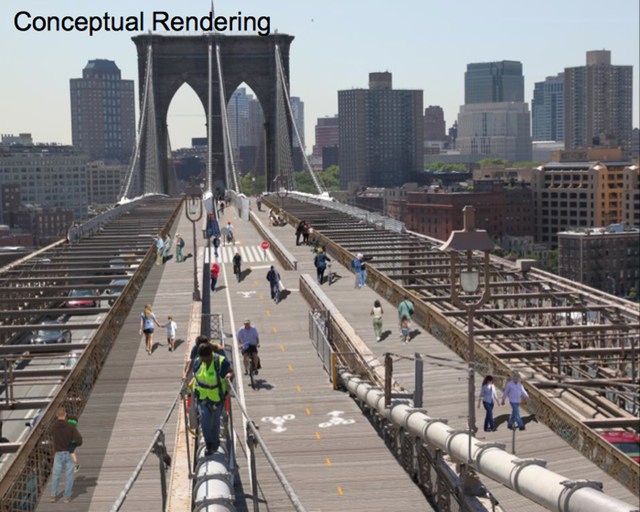 A vision of tomorrow? (DOT)

Anecdotal observations suggest that cyclist crashes on the bridge are underreported. A vendor has related seeing collisions almost every day. And in addition to my recent fender-bender, which didn't make it into a police report, I saw the aftermath of an unreported cyclist hit-and-run that sent a woman to the hospital two weeks prior.

Richard Traverse was coming off of the bridge with his family on the Brooklyn side that day at about 5:30 p.m. A Crown Heights resident, Traverse figured that after two decades in Brooklyn, he ought to see the sights, so he took the day off and brought two of his three kids out to walk the planks. He said he wasn't worried about the danger of cyclists whizzing by in tight quarters—until he saw the woman get mowed down.

"I wasn't stressing it," he said. "After that happened, I wanted to make sure to keep [my kids] on the inside."

Traverse said that the cyclist stuck around to check on the unconscious woman, "But then he saw the police coming."

Another 10 minutes passed before paramedics wheeled the woman, still unmoving, off in a stretcher. An officer on the scene said that the cyclist ran down the stairs to Washington Street. "It's unfortunate," the cop said. "You want to catch them but sometimes...The cyclist ran down the steps. No one saw which way he went. It's one of those things." 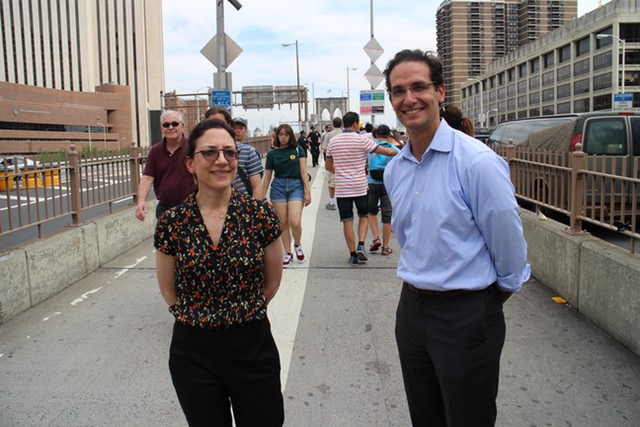 The city has commissioned a $370,000 engineering study of the bridge that DOT Commissioner Polly Trottenberg said she expects to take "seven-ish" months. "It'll be done sometime in 2017," she said at a press conference on Monday afternoon amid the throngs at the Manhattan entrance.

The study is supposed to assess whether the 133-year-old bridge can accommodate widening the path to extend out over lanes of car traffic, as already happens around the towers, and separating pedestrians and cyclists. The hired guns are also supposed to look into expanding part of the Brooklyn approach into an unused patch of car roadway, closing off the Manhattan stairway that creates a choke-point for cyclists and pedestrians at the foot of the hill, and adding crosswalks, Citi Bike stations, and permanent concessions to new expanded areas around the towers.

Chin said she's open to all ideas the DOT comes up with. "I'm just glad they're finally paying attention to this," she said.

Then again, the engineers could say no additions are possible.

"The biggest challenge is a fundamental one, which is: is the engineering feasible?" Trottenberg said. "Can we find a way that the bridge can accommodate the weight and can we come up with a design that will work on the bridge, that will work at both approaches?" 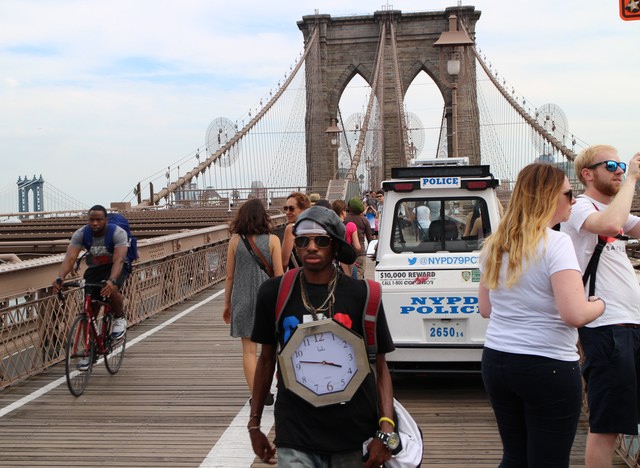 The Brooklyn Bridge accommodated trolleys and elevated trains, as well as pedestrians and horse-drawn carriages, more than a century ago, for what it's worth.

The idea of an expanded, separated bike path has prompted some cyclists to dream even bigger, imagining a lane of car traffic being converted for use by two-wheelers. Trottenberg said the DOT has not ruled it out.

"Certainly, we're seeing a lot of enthusiasm about the idea of making more of the bridge available for cyclists and pedestrians, so I think we'll have a lot of ideas on the table," she said.

A ban on cycling on the bridge is not one of the ideas currently on the table, Trottenberg added.

Support for expanding the promenade seems to be broad—"That'd be nice," a mom from Calgary who visits her daughter in New York often told us—but not unanimous.

Take Simon "DJ" Brown, who has been selling water and chips at the base of the Brooklyn tower for the last nine years and, at this point, seems hard to faze. Brown said he sees about two crashes per summer, but that the city should keep the bridge the way it is. Why?

"It's how it's supposed to be," he explained. "You just gotta follow the path."