Residents and business owners who have been complaining about the new Grand Street bike lane now have a video that they say demonstrates the traffic mess caused by the lane, which provides a dedicated space for cyclists separated from traffic by a row of parked cars. Sent to us by the Soho Alliance, the video depicts a truck driver turning from West Broadway onto Grand Street and mistaking the parked cars for idling traffic.

After realizing his mistake, the driver has a dickens of a time backing up, and at the 50 second mark an SUV driver says the hell with it (as only SUV drivers can) and simply drives down the bike lane—which might seem slightly comical until one recalls the death of 22-year-old Eric Ng in 2006. Ng was killed by a driver who mistakenly drove onto the bike path by the West Side Highway. Sean Sweeney, the director of the SoHo Alliance, calls the Grand Street bike lane "an unmitigated disaster" that's increased congestion, noise pollution, and even prevented emergency vehicles from making turns. (In the video, another driver yells, "All that honking for nothing!")

Wiley Norvell at Transportation Alternatives counters that "New York City has 6,000 miles of streets, most of which look the same as they did in 1950. We only have a handful of these newly-designed 'complete streets' installed, which means there’s going to be a learning curve for everybody. But as more and more of the City comes into the 21st Century, the net result will be safer streets for everyone." 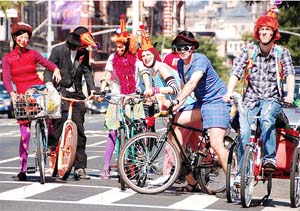 In South Williamsburg, residents and business owners have been chafing from the new Kent Street bike Lane. So on Wednesday morning, a group of bike-riding clowns will cycle along Kent to "defend" the controversial lane. According to a press release from Times Up!, the clowns will distribute information in English and Hebrew Yiddish "to educate bike lane opponents that removing bike lanes only encourages more people to drive,which further clogs our city's streets and taxes our country's oil resources." [UPDATE: Times Up! tells us they've changed the hand-outs so that they are now in English and Yiddish.]

Yesterday the Post reported that NYC has more bike lanes than any city in America, and the Bloomerg administration plans to install four times as many to accommodate a surge in cycling, which increased at least 35 percent between 2007 and 2008. Bike traffic on the Manhattan Bridge has risen from 546 to 2,232 riders per day in the past year, and on the Williamsburg Bridge that figure has jumped from 1,117 to 3,001. Norvell would like to see that Williamsburg Bridge number double; his group is pushing for a separated lane on Delancey Street to encourage more cyclists to take the bridge.

#bike lane
#Chinatown
#grand street
#little italy
#nyc
#soho
#video
Do you know the scoop? Comment below or Send us a Tip