Yesterday morning roughly 40 people, most of them immigrant restaurant delivery workers, gathered at the corner of Chrystie and Grand to demand the repeal of a city-wide ban on electronic bicycles that went into effect on November 11th.

According to protesters, the ban, which slaps businesses whose employees are caught using e-bikes with a $175 fine and possible bike confiscation, threatens to make it impossible for many delivery workers to both stay legal and keep up with orders in what is often a 10-12 hour day.

Organized by the Chinese Staff and Workers Association, National Mobilization Against Sweatshops, and the Urban Justice Center, the protest featured signs and chants in at least three different languages and had some less-than-rosy words for a certain golf aficionado.

"Bloomberg has never been concerned with the livelihood of low income workers," Wah Lee of the CSSA shouted from the forefront of the crowed. Lee and others called on mayor-elect de Blasio to repeal the ban immediately once he is sworn in on January 1st. "The electronic bikes help to reduce suffering while working," Lee said. 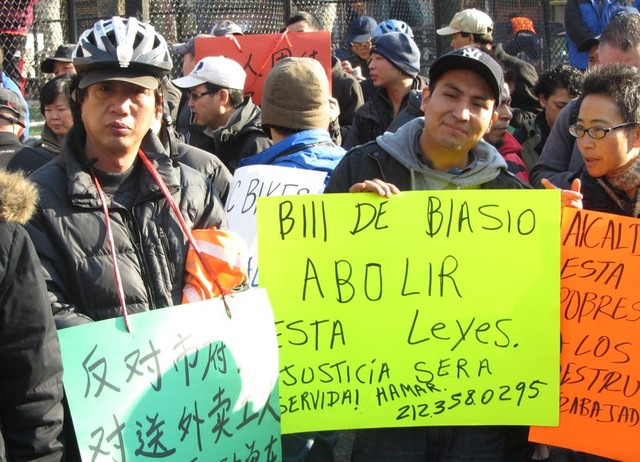 So far the movement to appeal the ban, which was passed in April with the aim of making pedestrians and traditional cyclists safer, has grown primarily through word of mouth amongst CSSA members and their coworkers. Plans for a larger demonstration near City Hall are in the works.

But some workers say restaurant owners have been consistently passing the cost of the fine on to the workers. Fai Loam, a deliveryman at a Japanese restaurant on West 3rd street, told us that he himself has been ticketed for using an electronic bike, and personally knows of at least 20 other immigrant workers who have already been fined. Loam, who is 50, said he currently makes $200-300 in an average week, that his $175 fine took him a month of saving to pay off. When asked what a long-term ban would mean for him, Loam seemed certain it would cost him his job. 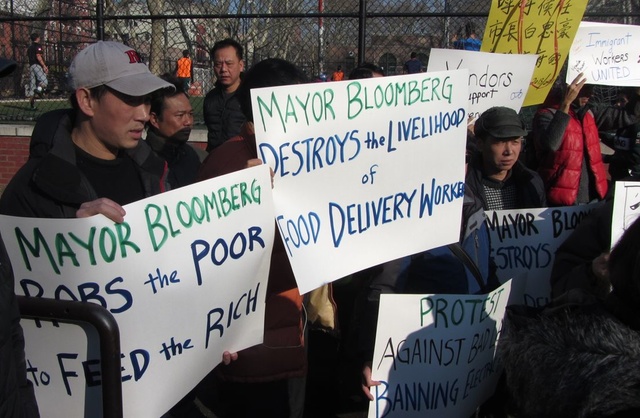 #e-bikes
#electric bikes
#original
Do you know the scoop? Comment below or Send us a Tip