There's a riotous cyclist on the loose, and the NYPD wants your help bringing him in. You may remember the suspect—he was caught on video standing on his bike in front of a white Audi during a violent mob scene at Broadway and Bleecker, during Fashion's Night Out last week. We published video and photos of the crazy scene, which devolved into people jumping up and down on the vehicle and kicking in the rear window. Naturally, a cyclist is to blame.

The incident happened around 11 p.m. on September 6th. The NYPD alleges that the cyclist, described as a white male, "placed his bicycle in front of the victim's auto to prevent him from moving forward." It's unclear what motivated this, but it appears there was an altercation between the driver and the biker, and one tipster witness told us "the Audi nearly hit a bicyclist crossing the Bleecker and Broadway intersection." The driver has not been identified (by the police); the cyclist is wanted for inciting to riot and criminal mischief. Here's the video clip that the NYPD released to the media:

Last week the NYPD told us they'd already arrested one person for Obstruction of Governmental Administration, and a second for Disorderly Conduct. They're also looking for a fourth suspect, who "did jump on the victim's auto breaking windows and causing extensive damage." That individual is also wanted for inciting to riot, as well as criminal mischief, and is seen in this photo by Jika Gonzalez: 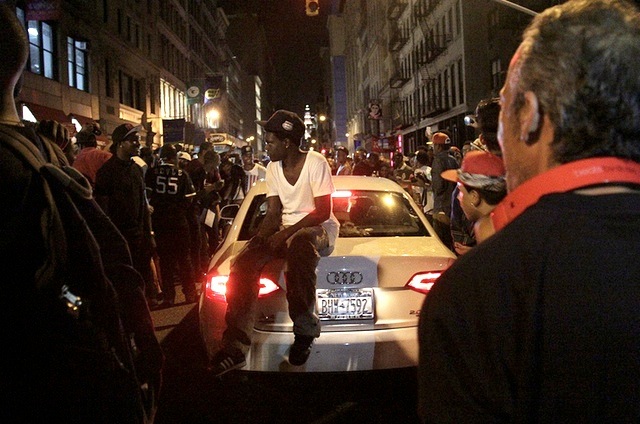 #cyclists
#fashion night out
#fno
#mob scene
#riot
#original
Do you know the scoop? Comment below or Send us a Tip