Early this morning, a police officer shot and killed a knife-wielding man who allegedly stabbed a yeshiva student at a Jewish Synagogue in Crown Heights. Video of the confrontation shows officers repeatedly ordering the suspect to drop his knife —which the suspect did, before apparently grabbing the knife again and lunging at officers.

The incident occurred in the headquarters of the Chabad-Lubavitch headquarters at 770 Eastern Parkway. The NYPD says a civilian alerted a nearby officer that a man inside the synagogue had stabbed another. Here's the official police account:

The officer responded and encountered the armed suspect, a 49-year-old male, inside of the location and ordered him to drop the knife numerous. Additional officers responded, and gave verbal commands for the male to drop the knife. The suspect placed the knife on a nearby table and quickly picked it up again, and lunged at one of the responding officers, who then discharged his firearm one time, striking the male in the torso. No other officers discharged their firearms.

Police are continuing to investigate, but video from the scene shows that officers, as well as members of the synagogue, trying to get the suspect to drop his weapon.

The Post reports that the suspect was Calvin Peters, 50, and sources said he walked into the synagogue while people were praying: "According to police sources, Peters asked for a copy of the Bible, then briefly walked out, sources said. He returned and stabbed an Israeli student in the side of the head for an unknown reason." 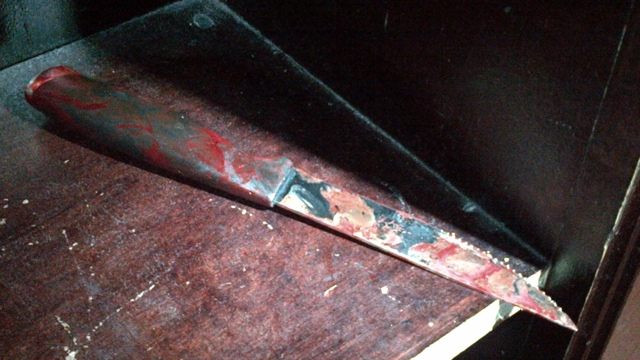 Police shared a photograph of the alleged weapon

A witness said this of the student, identified as Levi Rosenblatt of Israel: "He’s a very serious student he’d been studying all day. He was stabbed in the side of the head he was conscious but he was bleeding a lot." Rosenblatt is reportedly in stable condition.

At this point; these are the facts as we know them: At 1:37 a.m. an individual approached Levi Rosenblat, a young rabbinical student from Israel who was studying in the synagogue at the Chabad-Lubavitch Headquarters and stabbed him. According to witnesses he was heard saying repeatedly “Kill the Jews”. Several other individuals immediately intervened.

While we are very pained by everything that has unfolded, we are very grateful to the police for their quick response and are working closely with the authorities in their ongoing investigation.

We commend the heroic efforts of the individuals who were present and took immediate action, if not for their intervention the outcome could have been, G-d forbid far worse. We continue to pray for the young man who is in stable condition.

that police don't think the incident was terror-related, believing Peters to be an emotionally disturbed person: "[Deputy Commissioner John Miller] did say, however, that the NYPD will increase its presence outside synagogues and Jewish institutions as protection."