Security camera footage from a West 26th Street building appears to contradict preliminary NYPD statements and media reports that 36-year-old Dan Hanegby "swerved" away from a parked vehicle before fatally colliding with a moving bus on Monday morning.

Hanegby is the first person to be killed while riding a Citi Bike since the program launched in 2013. The discrepancy revealed by the footage would add him to a list of traffic crash victims, including Lauren Davis, James Gregg, and Jack Koval, whose final moments were inaccurately reported in the immediate aftermath of a fatal incident.

Gothamist reviewed security camera footage obtained by Hanegby's friend, on the condition that we would not immediately publish it, out of concerns it could traumatize his widow Sasha and young children. Hanegby's family shared the footage, taken from two different cameras, with the Manhattan District Attorney's Office on Wednesday. The DA's office declined to comment.

In one 30-second video, angled in the direction of traffic, Hanegby is seen biking east on West 26th Street between Eighth and Seventh Avenues. The video shows a bus accelerating behind Hanegby just as he begins to bike between a white commercial van parked to his right and a black SUV parked on the opposite side of the narrow one-way street.

Hanegby, who is wearing headphones and no helmet, appears to be traveling in a straight trajectory near the middle of the roadway. He briefly glances to the right in the direction of three people grouped on the sidewalk, then turns his head straight again as he passes the parked van. At that moment, the bus driver passes him. Hanegby's front wheel can be seen jerking to the right just before he passes out of view of the camera, behind the parked van. Viewing the video in slow motion, it appears the bus's wheel well clipped Hanegby's handlebars, causing the front wheel to twist right.

A second video, angled against traffic, shows the bus driver accelerating behind Hanegby after turning off of Eighth Avenue onto West 26th. As the driver passes Hanegby, the driver's side of the bus is noticeably close to the parked SUV on the north side of the street. On the other side of the bus, where Hanegby is biking by the parked van, the available space is also narrow.

Hanegby does not swerve. When the bus clips his bike, he can be seen falling down to the street. The bus driver runs over Hanegby's torso with the bus's right rear passenger tires, and continues partway down the block before coming to a stop.

A repaved section of the street leading up to the spot where Hanegby was killed creates a line parallel to the curb. In the first video, Hanegby is seen biking along this line and continuing along the same trajectory, without altering course or swerving, up until the moment he goes down. 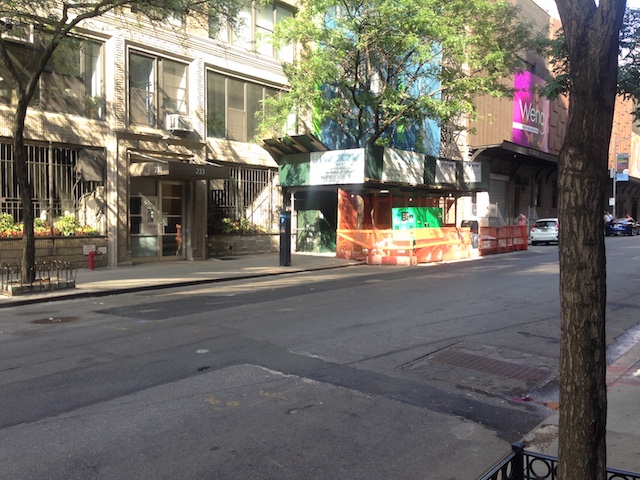 Witness Lanette Perez told us that she was in the front seat of the bus and witnessed the crash. Her account aligns with the video; she said she wanted to make it clear that the "story," as initially reported, "was not correct."

"We brushed him causing him to loose [sic] control," she wrote in an email. "I was in the front seat of this bus and witnessed it. He was ahead of us and the driver may have felt that he had enough room to proceed."

"He most likely lost control because the bus was inches away. My heart breaks for this man and his family," she added.

"This awful tragedy has been made more painful by inaccurate descriptions of the occurrence in certain rushed media reports," said the Hanegby family in a statement to Gothamist. "In fact, Dan was an experienced cyclist, and when all of the evidence comes out, we are confident that the responsible parties will be held accountable."

The family declined to comment further on the details of the crash.

"There should be a lesser degree of transparency—balanced with the need for accuracy—when it comes to releases to the press," said attorney Steve Vaccaro, who often represents cyclists killed by reckless drivers. "I think it is very important that DCPI [the NYPD press office] get it right."

"'Swerving' sounds like someone who has lost control," he added. "That's a very charged word to use in this circumstance." If Hanegby was approached from behind, he added, the driver may have violated the Right of Way Law.

On Monday the NYPD issued a brief statement to the media stating the following:

A preliminary investigation determined that a 52-year-old operator of a charter bus and the bicyclist were traveling eastbound on 26th street when they collided. The bicyclist fell to the ground which resulted in the rear tires rolling over the bicyclist.

But an NYPD spokesman provided a more detailed preliminary account to Gothamist, which he said was based off of the Collision Investigation Squad report. This account, which mentions an alleged "swerve," closely matched police-attributed comments published this week in the New York Times and Daily News, among other outlets.

The CIS report alleges that Hanegby was traveling east on West 26th Street along the south curb around 8:15 a.m., approaching an unoccupied parked van. "Surveillance footage shows the the cyclist looking right as he is swerving left," the spokesman said. "He is struck by the passenger side of the bus, loses control, falls to the pavement, and is then rolled over by the rear passenger side of the vehicle."

The spokesman said that CIS reviewed surveillance footage. Request for the footage could be made through a Freedom of Information Law request, he said.

In the aftermath of Monday's crash, cycling advocates have called for protected crosstown bike lanes. West 26th Street is a popular route from the West Side Greenway, they said. Some locals said that car traffic is also heavy. "I see cyclists with complete disregard for traffic," said a 26th Street Puppy Loft employee Wednesday who identified himself as John.

Hanegby, a father of two, lived in Brooklyn Heights and worked as a director of investment banking at Credit Suisse. He moved to the U.S. from Israel in 2000, and was once the #1 ranked tennis player in Israel. He married his childhood sweetheart.

"He cycled every weekend," said Erin, a close family friend who spoke on the condition that we withhold her last name. "He competed in cycling races. It was a strong passion of his. And he was a very aware cyclist. To suggest that he fell off his bike or abruptly swerved is inaccurate."

Sean Hughes, a spokesman for Hudson Transit Lines, confirmed that Hudson operates the bus involved in the crash, which he described as a "commuter bus." Buses must adhere to truck routes, of which West 26th Street is not one. Most buses can only stray "for the purpose of arriving at his/her destination" by the most direct route according to DOT traffic rules. Weekday Hudson buses terminate at 41st and 8th Avenue.

"Safety is our top priority and Hudson Transit Lines is fully cooperating with the authorities with their investigation into the incident," Hughes stated. "Our thoughts and prayers are with everyone involved."

A spokeswoman for the State Department of Transportation said, "NYSDOT's Public Transportation Safety Board is investigating the incident." The City DOT will assist the NYPD in its ongoing investigation, a spokesman said.

Parking signs on West 26th Street prohibit non-commercial vehicles between 8:00 a.m. and 6:00 p.m. on weekdays, on both sides of the street. It was not immediately clear if the black SUV parked on the north curb when Hanegby was struck was commercial.

The 52-year-old driver has not been ticketed or charged, according to the NYPD.

#Chelsea
#cis
#dan hanegby
#fatality
#video
#original
Do you know the scoop? Comment below or Send us a Tip