The protesters yelled, "Mitt Romney and Chris Christie serve the corporate 1 percent! Bust up big banks / make Wall Street pay / Put people first." Two of the protesters were on stage with Romney supporters, but were eventually bounced out with the others. As the demonstrators were being removed, Christie, his voice dripping with condescension, asked, "You're so angry, aren't you? Work it all out... Oh, work it out. Work it all out for yourselves. Work it all out for yourselves. You know what, we're used to dealing with jokers like this in New Jersey all the time." 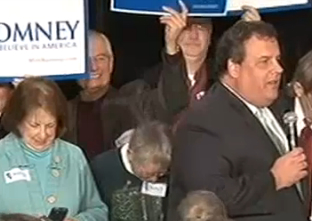 After things settled down, Christie demonstrated that as annoying as the "people's mic" is, there's nothing more infuriating than a smug conservative rewriting history. Christie told the roomful of Republicans, "Now, where was I before I was so New Jers-ily interrupted? Here's the way I feel about it: They represent an anger in our country that Barack Obama has caused. He’s a typical cynical Chicago ward politician, who runs for office and promises everything and then comes to office and disappoints. And so their anger is rooted not in me or Mitt Romney, their anger is rooted in the fact that they believed in this hope and change garbage they were sold three years ago."

Christie continued, "So now they're angry but they’re not mature enough to know they should be angry with themselves. I hope you all enjoyed it. They'll be working at the Marriott down the street. Please remember to tip your waiters and waitresses, all right? If there was a Chris Christie appearance without a YouTube moment," he said, "we wouldn't know what to do." Uh, blissfully ignore it?

On his way out, Christie also called Romney "the steady, mature leader we need for our party and for our country," and said he was touched by the politician's "extraordinary heart... I saw him interacting with my kids in a way that was not showing off for me—natural." Wow, does this mean the electorate has graduated from voting for the guy they'd most like to have a beer with to voting for the guy they'd like to invite to their kid's birthday party? We're growing up, America!