A four-story building collapsed in Bedford-Stuyvesant yesterday—the space was vacant and an application for its demolition had been submitted to the city, according to applications filed with the Department of Buildings. Still, three passersby were injured by flying debris, and surveillance video obtained by NBC New York shows the collapse in its entirety:

Leslie Green, an employee at a clothing store on Fulton Street, told us yesterday that he heard a loud crash, "like a garbage truck compacting trash," when the building came down. "When I really craned my neck to look out the window, I saw the horizontal crack in the building and the upstairs windows were still intact," he told us, adding that dust covered the whole block. "The building's top floors fell over, you can see the wood floor still intact," he said. 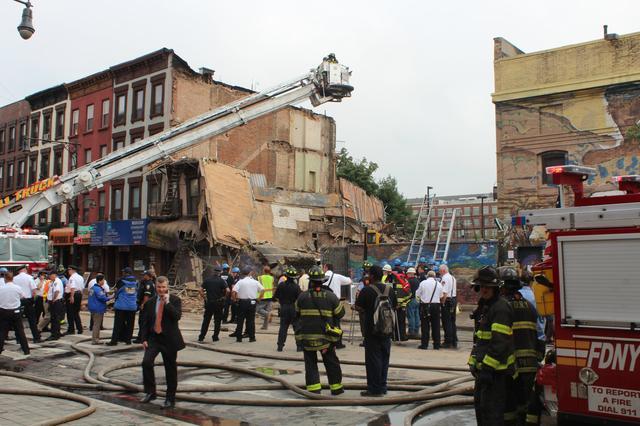 The building, which contained five rental apartments and a retail space, was owned by Moses Strulowitz, who purchased the property and 1428 Fulton Street for $11 million last year. He reportedly plans to build an apartment building at 1430 Fulton Street. An application for demolition on 1438 was filed in December of last year, though the DOB had not yet issued a permit for its demolition. A witness told us yesterday that he spotted firefighters standing outside the building on Monday evening, but did not see them go inside.

The injured victims yesterday included a cyclist and two other people in the area. All three were treated for minor, non life-threatening injuries at local hospitals.

#1438 fulton street
#bed stuy
#brooklyn
#building collapse
#DOB
Do you know the scoop? Comment below or Send us a Tip