The stench of death, of hot entrails, feces, and blood, pulled at the nostrils of the hundreds crowded along on a closed-off half-block of President Street in Crown Heights on Monday evening. The source of the odor was the chickens that men wearing aprons and shower caps were slaughtering by the dozen under bare bulbs on a makeshift stage taking up 50 feet of sidewalk for the ritual offering of kapparot.

Organized by Eshel Hachnosas Orchim, a group that hosts many of the thousands of Hasidic Jews who travel to Brooklyn from around the world to celebrate the High Holy Days in the home of the late Rebbe Menachem Schneerson, the event offered participants the opportunity to buy the chickens for $12 each—roosters for men and hens for women. Chicken in hand, the purchaser would read a prayer as the bird is waved over his head three times, then hand it off to have its throat slit as a reminder that death could be nigh and he should repent.

To an outsider, the slaughter is grim, but in the crowd, amid a chorus of cheeping chickens, the mood was upbeat. A father fielded a phone call to assure a relative that he had ordered chickens for his wife and each of his children and was just waiting for them to be handed over. A mother of two infants rocked her double-stroller back and forth as her elementary-school-aged sons examined their feathered acquisitions. Teenage boys drifted through the crowds in groups, newly emboldened with their hints of facial hair and felt hats, while deputized others rattled buckets collecting donations for various institutions.

(The video below contains graphic footage of caged chickens eating each other.)

On the fringes, though, the scene got ugly. A crowd of 30 or so men, teenagers to seniors, gathered around an activist named Michelle who was filming with her iPhone. She was surrounded, and made no moves to become less so, instead yelling, "Shame on you!" There was a tussle, and 71st Precinct Community Affairs Officer Frank Bulzoni escorted a crying Michelle, who declined to give her last name to a reporter, from the barricaded area at the foot of the slaughter platform.

"You're not wrong. What you did wasn't wrong," Bulzoni repeated to her, until an elderly Hasidic man standing in traffic on Kingston Avenue caught his eye. When the man wouldn't move, Bulzoni lost it and hustled the man across the street, bellowing, "Grow up! You've got to learn to act like an adult! You're a child!"

"You were whispering to her, now why are you yelling at me?" the man responded. "You're supposed to protect the community!" a second man yelled.

A white-bearded man waded into the chaos brandishing two chickens by their wings in the face of Michelle and other activists gathered to protest the slaughter. Reaching over a barricade with both hands, he mashed the two chickens into a protester's shirt. Asked to explain his actions, he declined to identify himself, but said a woman had grabbed his wife and daughter. Another circle formed around a videographer and Michelle. This time she yelled, "You people are sick!" and "Don't fucking touch me!" The assembled men responded with chants of "Shiksa, shiksa," "Go fight ISIS," and "What about abortion?" A young man named Larry McDrew jeered from one side, "I'm gonna get you." 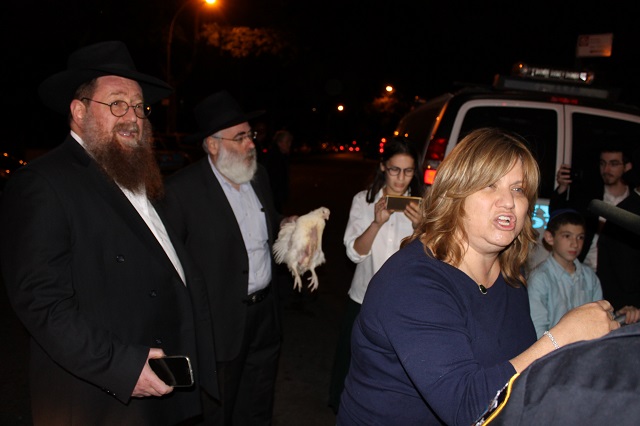 Hostility was sometimes also directed at non-Hasidic reporters. The chicken-wielder's wife tried to blot out a Gothamist videographer's shot of the slaughter by holding her iPhone to the lens, and tried to block a reporter's camera with her hand, screaming, "You don't have the right to photograph me! Don't impose your cultural values on me!" A man grabbed the video-camera's lens and tried to press the record button. Another interrupted an interview to accuse Gothamist of anti-Hasidic bias and of preparing a "hack job." Teens frequently stood in front of cameras in a line, while others crowded around behind and jostled.

The explanation for all the disruptions is obvious, according to Sara Erenthal, who grew up in Borough Park, left the ultra-Orthodox Neturei Karta sect at age 17, and happened past the kapparot gathering near her Crown Heights apartment on Monday.

"Growing up, you're brainwashed to think that everyone hates you and that the Holocaust is about to happen again," she said. "People aren't mean, they just don't know any better."

Asked if we were being lumped in with the protesters, Chabad world headquarters student Mendy Turen said yes: "Now you know why people are being rude." 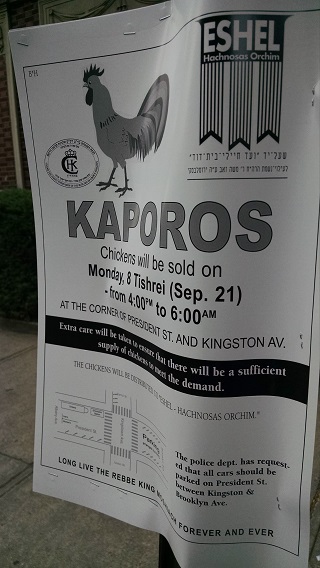 The protesters have grown in number and command of media attention since the Alliance to End Chickens as Koporos formed in 2010. The group argued in a lawsuit filed this summer that police and health inspectors turn a blind eye to serial law-breaking that can come with kapparot, including unlicensed butchering; lack of sanitary precautions for the areas where chickens are stored, sometimes for days, in cramped racks; and lack of food and water, which can qualify as animal cruelty.

The chickens are supposed to go to feed the poor, but activists have also documented them dead in dumpsters along Eastern Parkway and abandoned still alive in crates following the festivities. Last week, a judge declined to block this year's kapparot rituals, but the suit is ongoing. In 2013, thousands of birds left out in the elements around Brooklyn died during a heatwave.

On Friday night, activist David Karopkin came across a stack of crates that he says contained about 1,000 birds in a locked lot at 43rd Street and Dahill Road in Borough Park. He says he and a friend watched for 15 hours as no food or water was delivered. Twice, he says, police from the 66th Precinct came out and both times they refused to file a report. Video he shot appears to show several chickens pecking at the flesh of a dead bird in their crate. He said he stayed until a private investigator took over his vigil, and that no one showed up at the lot until it was time for the slaughter later on Saturday.

"It's not just cruel—it's illegal," he said, noting that even if just animal cruelty was considered, the people responsible could face as much as a year per count.

"I'm not saying [kapparot practitioners] should be thrown in jail. I'm just saying someone should at least recognize that there's crimes being committed here."

This year, tarps went up around many kapparot sites in an effort to provide a layer of privacy to the slaughter, but activists and practitioners say the ritual is basically unchanged by the campaign to end it. Moishe Levy, a Chabad follower on hand on President Street to socialize, said the judge's refusal to halt the event speaks volumes.

"It went to court and a court of law of New York City decide," Levy said. "What more is there to say?"

Levy recalled how in his youth people performing kapparot would travel to kosher slaughter houses on Pitkin Avenue to get chickens, and said that if a judge had banned the street party that has taken hold in recent years, people would return to slaughterhouses. Personally, he plans to perform the sacrifice in his Brooklyn backyard, saying "that's the original tradition."

"My great grandfather did this in Russia. He did nothing wrong," Levy said, adding, "All the evil forces in the world don't want the Jews to have their tradition."

Recurring arguments emerged from the faithful's confrontations with animal-rights activists. They included: If you care so much about chickens' lives, what do you think about abortion? Why are you worrying about this when there is ISIS? And, most commonly, kosher slaughtering is the most humane way and far worse things than kapparot happen in industrial slaughterhouses every day (animal rights activists we spoke to largely oppose killing animals, period, and chose kapparot as a campaign because of its in-your-face nature. Many also rescue animals and advocate against factory farms).

Speaking in a Crown Street apartment building's ground-floor synagogue earlier in the day, trained rabbi and Chabad Lubavitch social media director Mordechai Lightstone said the practice is done in part "to come face-to-face with the reality of the food that we consume, and the reality of the world around us, and the transient nature of life."

Other Orthodox Jewish sects have sworn off the use of chicken as kaporos, using coins or fish instead. Activists have delved into the esoteric rabbinical law debates underpinning these divisions, and hold up theologians who oppose the slaughter to any Hasid willing to listen. But among Hasidim, it's very clear who has the authority to change how people live, and it's not people wearing surgical masks and carrying blown-up photos of mutilated birds.

"Have you talked to the rabbi?" 18-year-old Yacov Malov said. "What else do you need to know?"

Rabbi Shea Hecht, a major proponent of the practice in Brooklyn, did not respond to interview requests, but has spoken at length to the media. "What I've told my local police department and my local government is, 'I'm an American. We have freedom of religion,'" he told NPR in 2009. Lawyers cited religious freedom in defending the lawsuit naming Hecht, the NYPD, the Health Department, and 19 other kapparot groups and organizers, but Manhattan Supreme Court Judge Debra James has declined to rule on that for now.

Despite the headline-grabbing bird-flipping and camera-blocking tactics of some, there is a diversity of opinion among Hasids about just how the chickens are handled. One cantor visiting from Melbourne, Australia said that where he is from Hasidic families drive to an abattoir outside of the city to perform the ritual, and hold the chickens in ventilated boxes when handling them. He said the atmosphere in Crown Heights is undeniably "a bit uncomfortable" at first glance, but that it is a function of so many people performing the ritual together in the middle of the city, which forces them to rely on factory-farm suppliers and crude storage methods.

Bilad Yoram, visiting from Afula in the north of Israel, trained for two years to become a shochet, or kosher butcher, and now works at a hospital where he prepares meals for needy people. He faulted "the way [the Crown Heights kapparot] is maintained" for giving fodder to protesters. In his experience in Israel, he said, the slaughter takes place in private yards and there are just three hours between the procurement of a chicken and its killing, which is "instant."

"I do hope that it will change, that you won't have to see every year that [protesters] will come and manifestate here," he said, "and that we'll be in a very right place where everything is clean."

The NYPD, the NYC Health Department, and the New York City ASPCA did not respond to requests for comment.