On Monday night, Crown Heights played host to the latest installment of New York City's annual Kapparot wars, wherein animal rights protestors try to call attention to the ritual slaughter of chickens practiced by some ultra-Orthodox Jews on the eve of Yom Kippur. Participants perform the Kaparot by swinging chickens, brought to the site in hundreds of packed crates, above their head three times before the animals' throats are cut, drained of blood in upside-down cones, and supposedly donated to charity. Sins, they believe, are transferred to the unhappy birds and vanish when they die.

Anti-Kaparot demonstrations have had mixed results in the past, but Monday's protest drew over 30 people—enough that the NYPD erected a holding pen for them, packing them in like, well, like chickens. Ultra-Orthodox Jews affiliated with the nearby Chabad Lubavitch World Headquarters on Eastern Parkway gathered around railings to leer and argue with the picketing activists, who for much of the night were a bigger attraction than the avian bloodbath itself. In this video, it only takes 30 seconds for Hitler to be invoked: 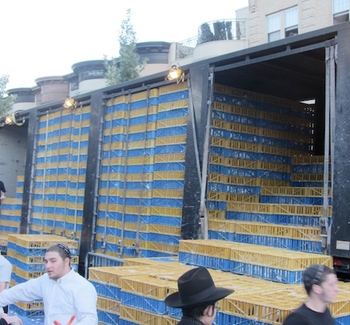 Many of the onlookers were skeptical. "If you're an animal lover," said one young Kaparot participant who refused to give his name, "there are animals in Africa that have it far worse. Why come here?"

But Naftali Tzvi, 17, who'd been taking part in the Kapparot for most of his life, said that the welfare of the doomed animals was important to those involved. "It's not a problem with the slaughter, because how else do you eat chicken? But as far as mistreatment," he shrugged, "the Torah commands us not to mistreat animals."

Rina Deych, founder of the Alliance to End Chickens as Kaporos, an offshoot of the Virginia-based United Poultry Concerns, stressed that she wanted to make the case against chicken slaughter in religious terms. "The Torah tells us to feed our animals before we feed ourselves," she said. "The whole process is extraordinarily cruel."

Deych, whose house was allegedly vandalized by pro-Kapparot activists two years ago , excused herself momentarily—the protestors had been negotiating with the Kapparot organizers to bring the birds water and food, giving the whole affair the feeling of a hostage negotiation. The negotiations were in vain.

By the time hundreds of chickens had been filled with sin and drained of blood, and the slaughter came to a close, the energetic shouting match around the NYPD holding pen had won few converts. Yelena Kozachkova, an Orthodox Jewish anti-Kapparot protestor, said that was no accident. The two sides, she said, have learned to talk past each other. The protestors on her side of the fence—which included a man who played an accordion decorated with Occupy Wall Street decals—"will get nowhere. In the end, nobody cares about the chickens." And Hasids on the other side of the fence "refuse to see that the practice they follow now is far from that which was followed by their ancestors," and that Jewish scholars since Maimonides have taken issue with the use of live Kaparos.

It's a line of argument that failed to persuade the young Kapparot participant we spoke with, who refused to give his name. "They can do what they want, and I'll do what I know is right," he said, "and they can go jump in a lake."