Victims Of Shoddy Construction In Bed-Stuy Buckle Under "Emotional Abuse"

The banging started in mid-August. An excavation crew had begun working in the wide vacant lot next door to Pamela Townson's apartment in a stately townhouse on Jefferson Avenue in Bedford-Stuyvesant. As the days progressed, the backhoe tore down large trees and started to get frighteningly close to the house. Then the drilling began. Townson said she complained to the contractor that the work was shaking her building, but got nowhere.

"I say, 'The walls are shaking, the pictures are coming off my walls!'" she recalled. "They say, 'You can't tell me what to do.'" 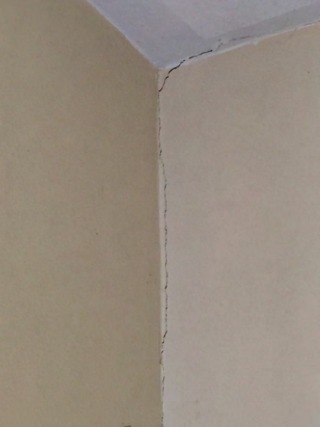 One of several cracks building owner Dmitri Gibbs says was caused by illegal excavation next door. (Photo by Dmitri Gibbs)

The developer of the lot at 804 Jefferson Avenue, an LLC called Jefferson Holding Venture represented by members of the Tehrani family, with offices in Jamaica, Queens, plans to build a five story, 28-apartment residential building. The complex is supposed to be flush with the houses on either side, and will include underground parking (the mansion that formerly occupied the lot burned down in 2012 in an arson that police say they arrested one juvenile for). Townson and her landlord Dmitri Gibbs say contractor Kings Star Construction has been digging under Gibbs's townhouse to pour a foundation wider than the lot, and has cracked the building's walls in the process.

"They drill, do the underpinning, then have a cement truck come, around 5, 6 p.m. to fill it up," Townson said. "So that if somebody comes it's like, 'We're not doing something.' If you don't catch them, it's your house."

Gibbs said he never gave the Tehranis or Kings Star Construction permission to dig under his house. He was on vacation when the work began, and came back to messages from tenants complaining that the contractor had knocked down power lines, torn up shrubs, and destroyed a fence. When he visited the construction site in mid-September, he found workers digging under his building.

Gibbs, a real estate photographer and small-time landlord, is indignant about what he says was zero communication from the Tehranis about their plans.

"They’re supposed to formally reach out if they’re going to do something that’s invasive," he said. "They know that I never would have granted permission."

In mid-September, inspectors showed up and halted construction, citing the builders for unpermitted work, failure to let the Buildings Department know digging had begun, and failure to notify the owners of neighboring buildings. The department has levied no fines so far.

An engineer's report commissioned by Gibbs states that the cracks and bulges in the walls of 796 Jefferson were caused by improperly supervised excavation work, and "further irresponsible work will result in structural damage." Gibbs said, based on his understanding of the Tehranis' plan, if they can't dig under his building, they'll have to shave four feet off of theirs, which could cost them a fortune in lost time, lost parking, and lost residential square footage. He argues that the thousands of dollars in fines they could face for illegal work are nothing compared to what they'd gain from getting away with it.

"Rather than seeking permission these developers will just move forward," he said. "The fines are nothing. There’s really no incentive for them to follow the rules."

Buildings Department spokesman Alexander Schnell disputed this line of reasoning, saying that even if a developer finishes unpermitted work, the agency won't grant a certificate of occupancy. He stressed that the department is expanding its enforcement capacity, having hired 95 inspectors this year, with plans to hire 500 altogether. He said there is also a new push to identify habitually shoddy contractors and revoke their licenses or refer them to law enforcement.

"The department, where necessary, aggressively pursues and takes enhanced disciplinary action against problem construction professionals that repeatedly fail to follow the construction codes and allow their worksites to cause a danger to the public," Schnell said.

Schnell said 10 contractors have been fined, suspended, revoked, or otherwise disciplined in the last two years. The Tehranis did not respond to a call or emails requesting comment. Reached by Facebook, Perry Tehrani said, "I do not own any property in the city." After this article was published, she wrote, "I'm sorry I do not know anyone related to that transaction." A man who answered the phone at Kings Star Construction said to call back. A subsequent call went to a voicemail box that was full.

For now, Gibbs is talking to lawyers and the work is on hold. But Townson, a block association member and bagel store manager, is still doing battle with developers building three other apartment complexes within a half block of 796 Jefferson. Reached by phone on Monday evening, Townson was with neighbors waiting for the police to arrive to a site where she said contractors were excavating after hours without a permit. One of the two workers had no hardhat, she said.

Townson can rattle off infractions like these. There are the parking spaces she says the Tehranis' contractor takes up even though they have driveways, the sawhorse she says another leaves on the sidewalk with nails sticking out of it, the church across the street that she says was ripped down with no water to contain the lead-paint-laden dust. She says by the time the cops showed up responding to a call about that demolition, the workers had left.

Altogether, the Department of Buildings has cited developers of three of the four sites 12 times since the summer. One contractor, Emma Group Management, which lists an office in Glens Falls, New York but is active in Brooklyn, has racked up $20,130 in fines at 827 Jefferson. The developer, an LLC represented by Great Neck attorney Asaf Dror, plans to build a four-story apartment building where a two-story house had stood. Despite the outstanding fines for failing to protect workers and neighbors and failing to post permits, work there is allowed to proceed. Seeing all the construction continue is "disheartening," Townson said. 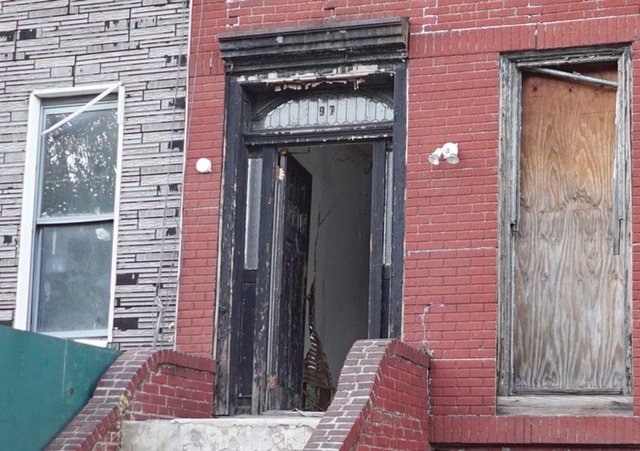 A large crack is visible through the front door of 97 Quincy St. after a wall it shares with the under-construction townhouse next door partially collapsed. (Photo by Kris Wong)

As bad as things are on Jefferson, they could be worse. Shoddy construction has caused numerous building collapses in New York in recent years, particularly in Bed-Stuy, where a speculative building boom is underway amid tight quarters like Townson's row-house-lined block of Jefferson. Reports of such collapses are easy to find, but their consequences quickly fade from view.

Darrell Chambers, one of seven people rendered homeless by a partial building collapse at 95 Quincy Street in October, is still feeling the effects. Chambers lived in 97 Quincy Street, a two-and-a-half-story townhouse owned by his godmother Antoinette Smith. Workers next door had been digging under Smith's house, and on October 12th Smith brought over an engineer to check on its stability of the house. Smith and Chambers had just said goodbye to the engineer when everything fell apart.

"We were standing on the steps talking when all of a sudden we heard this loud rumble and the wall just caved in," Chambers remembered. "[Smith] had a panic attack and I had to carry her up the stairs."

The internal collapse was tearing at the wall their house shared with 95 Quincy, so when firefighters arrived, they ordered Chambers and Smith out and said no one could go back inside.

"It was unbelievable," Chambers said. "I realized, at first slowly, I was like, wow, I’m basically homeless with no possessions...At 1 o’clock I had a place to live, and at 1:30 I didn’t."

The following week, Chambers got fired from his job as a waiter. He had called in sick too many times to stand vigil at his former house, hoping to convince a building inspector to let him in to retrieve his things. Chambers is an artist and screenwriter, and among the possessions still stuck inside the house are 10 legal pads comprising two draft screenplays. He has no backups.

He is currently living with his brother in South Ozone Park, Queens, and looking for work.

Following the collapse, the Department of Buildings demanded 95 and 97 be demolished, and the houses touching on either side be temporarily vacated. Because the illegal construction work has rendered the ground beneath the buildings unstable, demolition has to be done by hand from a cherry picker. Hearings are pending for eight violations against Bar-Mashiah and his contractor Top Notch Construction related to the illegal work that caused the collapse.

Top Notch owner Richard Alphonso said he never worked on the site and is planning to go to the Buildings Department to find out how he got listed as the contractor. 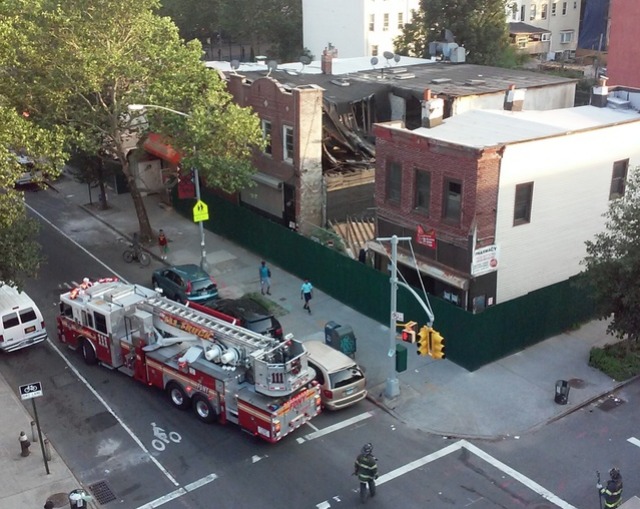 Chambers is not the only one still homeless from a collapse. Michelle, a fashion production assistant who asked that we use her first name because she is in the midst of looking for an apartment, is still subletting in Bushwick and paying for a storage unit after shoddy demolition work next door caused a collapse that destabilized her building back in June. The Tompkins Avenue collapse forced Michelle, two other tenants, and a vet clinic to vacate.

Michelle said her roommate had sent invoices for her moving expenses to the demolition company and gotten reimbursed, but that she is waiting to find a permanent place before tallying her losses. There is one thing she gained in all this: a new set of criteria for her next apartment hunt.

"More than anything, I'm going to take a lot more precautions next time I go to find an apartment," she said. "Anything that is near a green fence is a no-go."

#Bedford-Stuyvesant
#building boom
#building collapse
#department of buildings
#excavation
#illegal construction
#longform
#original
Do you know the scoop? Comment below or Send us a Tip