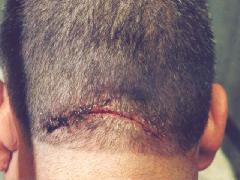 After an off-duty detective shot two men at a Baxter St. residential address--killing one of them--cops are looking for the ex-boyfriend of the building's receptionist. Detective Martin Carrano fired ten shots Wednesday evening after he had been slashed in the back of his head and in defense of 26-year-old Artemda Gjeli, who worked as a receptionist at the building.

Carrano was checking in on Gjeli after she reported a threatening phone call from her ex-boyfriend, Aleksander Vacaj, against whom she had previously filed a domestic violence complaint with the 114th Precinct in Queens (she said Vacaj slapped her at a club).

When two Hispanic men entered the Baxter St. building in Chinatown and almost immediately attacked Carrano (his wound is pictured) and Gjeli under the pretense of robbing a hotel, Carrano killed Eugene Morales with two shots to the chest and wounded Andres Martinez with shots to his chest and arm. It's the first time in 20 years on the force that Carrano had to discharge his weapon in the midst of a violent confrontation. And Gjeli needed 23 stitches after being slashed in multiple places.

While there is no immediate connection between Morales, Martinez, and Vacaj, who is an Albanian national with a rap sheet that includes assault and harassment. Gjeli got in touch with Carrano on Wednesday after Vacaj allegedly called her and threatened her family. The threatening phone calls and slash-attack later that evening could be a pure coincidence, but police want to speak with the 32-year-old man to determine if he had any relationship to the dead and wounded men.

#123 Baxter Street
#attack
#baxter street
#Chinatown
#police shooting
Do you know the scoop? Comment below or Send us a Tip
A new Gothamist is coming! We’ve moved comments over to our beta site. Click here to join the conversation and get a preview of our new website.