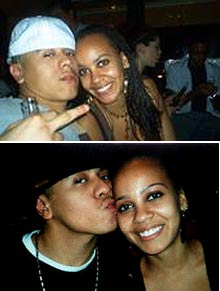 Last night, the police found the boyfriend of the 20-year-old woman whose dead body was discovered wrapped in bedding in a Greenwich Village apartment. Police say Michael Cordero, 23, tried to slit his wrists on the roof of a building at West 62nd and Amsterdam; the Daily News reports that a family member tried to stop him, but Cordero "fled down the block, trailing blood, to a Western Beef supermarket on West End Ave." where he went to wash up. Police took him to Roosevelt Hospital and allegedly told the hospital staff, "I killed my girlfriend. I couldn't take it, so I tried to kill myself."

Charges have not been determined yet, but it's believed that Cordero was very jealous of girlfriend Boitumelo McCallum and feared she was going to break up with him. Cordero had apparently confessed to a friend that he killed McCallum on Monday night, and the friend went to the police yesterday. A police source tells the Post, "[He] confessed to the friend in detail what he did and how he did it... He told this friend that he went to see her... that he killed her, and she screamed. The boyfriend is definitely our guy."

McCallum, a student at Mills College in California who was born in South Africa and grew up in New York, had been staying in her mother's apartment at Washington Square Village and had thrown a party last Wednesday night. Cordero was not invited and allegedly confronted her. An autopsy by the ME's office was inconclusive (the body was discovered about four days after the killing and was very badly decomposed), but police say that McCallum's face and head had signs of trauma and that her nose was broken.

McCallum's family and friends were not surprised. McCallum met Cordero 2 and 1/2 years ago, when she attended the Beacon School, where he had some friends. Cordero moved to California to be with her this spring, and a classmate from Mills told the News, "She really protected him from us because we were all so concerned. She loved so hard that she didn't ever want anything to be wrong with anyone." And her stepmother, Patricia Maguire, said the Sun, "They had broken up some time ago and she was very much trying to get away." Additionally, the police say McCallum's mother, an NYU professor, knew that her daughter had been beaten by Cordero.

Cordero, who grew up in the Amsterdam Houses and was working as a security guard at a music store, is in stable condition. He had logged into his MySpace account on Monday (his mood: "restless"; quote: "the present is what you get, the past is what makes the man, the future i can't tell you...i ain't god or no superman," which is from Styles' A Gangster and Gentleman). His sister told the NY Times that McCallum "was welcome in the family; she was a very nice girl. He was her everything.” Her boyfriend said to the Times, "They were a happy couple; they were very close," but added to the News, "They had a young love with a lot of jealousy on both sides... It wasn't nothing crazy."

Rudi Mbele, a South African music promoter who knew McCallum, told the Daily News, "This is really a heinous crime. This kid survived apartheid and came here to make a good life, but instead she runs into a maniac."