"You do not see Dame's advertisements because the MTA—in contravention of the First Amendment, due process, equal protection, and common sense—has banned them from being displayed on MTA property," reads the lawsuit, filed Tuesday in the United States District Court for the Southern District of New York. "Although the MTA has previously welcomed advertisements that celebrate human sexuality and openly discuss sexual health and function—not to mention advertisements that use sexual imagery or explicit text to sell consumer goods—the MTA excluded Dame from this vibrant public discourse and denied Dame coveted advertising space."

According to court documents, in July 2018 Dame originally submitted sample ads to Howard Marcus, an account executive at OUTFRONT Media, which handles MTA advertising. Initially, Marcus allegedly told Dame the samples were "very thought-provoking," but by September 2018, he seemed to have changed his tune. He told the company that the MTA had "an uneasy sense regarding the undertone of the ad," which made reference to riders "getting off (the train)," and asked that the company send revised copy.

A sample from Dame's first round of MTA ad submissions. (Courtesy of Dame Products)

A second round of proposals, sent to Marcus on September 24th, replaced some of the innuendo with more straightforward language—"Toys for Sex," "More intimacy than rush hour," "Some riders need extra help getting off"—alongside the company's innocuous-looking vibrators. Of that ad batch, Marcus allegedly told Dame that the MTA had "no objections" to two slogans: "Toys for Sex" and "Get from point A to point O." The others, he said, according to court documents, were "not allowable as submitted" because they "entangle the MTA and its service and customers with the promoted product, which is contrary to one of the Advertising Policy's objectives."

An accepted sample from the second round of Dame's MTA ad submissions. (Courtesy of Dame Products)

Dame argues that the MTA has a double standard when determining what ads are too provocative, pointing to campaigns from companies like Hims and Roman, both of which use sexually suggestive imagery and text (the aforementioned cacti for Hims, direct mention of ED meds for Roman) to market erectile dysfunction medication to men. You may have seen these at a subway station near you: 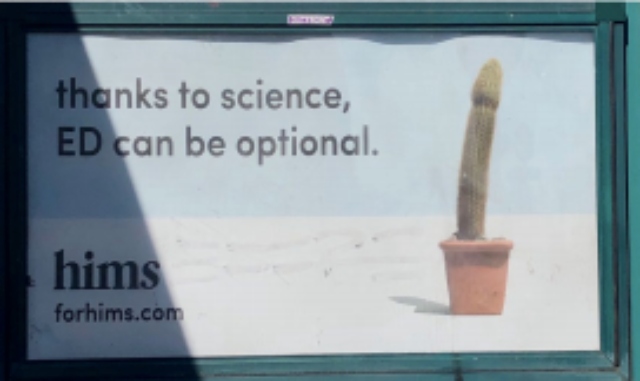 Meanwhile, companies such as Thinx (which makes period-proof underwear not just for cisgender women, but also for trans and non-binary people) and sex toy company Unbound have run into conflict when trying to get a greenlight on their ads. According to the Dame lawsuit, the company pointed this out to OUTFRONT, while agreeing to "massage the messaging a little." Their third and final round of submissions looked like this: 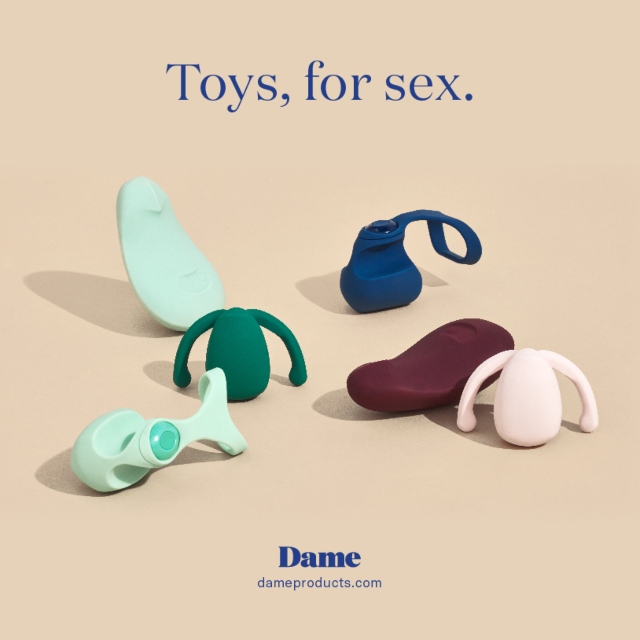 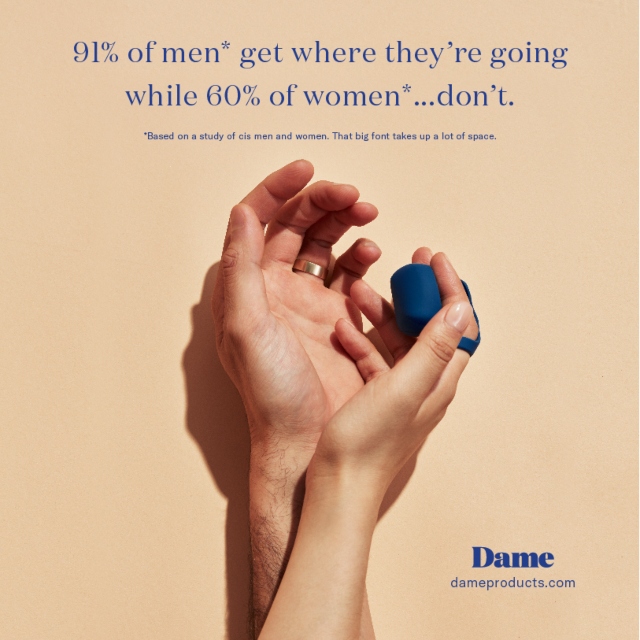 On November 26th, 2018, the lawsuit says, Marcus reported back that all of Dame's ads, including those featuring the previously approved slogans, had been rejected because, in the MTA's words, they "promote a sexually oriented business, which has long been prohibited by the MTA's advertising standards." On November 15th, the MTA updated its advertising FAQ to ban "sex toys or devices for any gender."

Despite the Dame founders' efforts to get more explicit answers as to why their vibrators, which are intended to promote sexual wellness in cis women, trans, and non-binary users in much the same way ED meds do for cis men, ran afoul of advertising guidelines, they say they were met with radio silence. Now, they are asking compensatory damages—according to the lawsuit, the company poured $150,000 into crafting the campaign—to be determined at trial, alleging that the transit authority violated its right to free speech with gendered policy.

"This lawsuit is important because it is necessary for us to change society misconception of vibrators and sexual pleasure as harmful when in truth, not reminding individuals that sex SHOULD be pleasurable, is harmful," Dame co-founder and CEO Alexandra Fine said in a statement. "The vague and sexist reasons behind the MTA's refusal to show our ads are not only barring many businesses like ours from growing their companies, but their censorship is a violation of first amendment rights."

In a statement to Gothamist, MTA Chief External Affairs Officer Maxwell Young said: "We have not been served with this lawsuit and cannot comment on it directly, but their public statements are clearly inaccurate as the MTA's advertising is in no way gender-based or viewpoint discriminatory. The MTA's FAQs about its advertising policy clearly states that advertisements for sex toys or devices for any gender are not permitted, and advertising for FDA approved medication—for either gender—is permitted. In its proprietary capacity as the operator of a transit system used by all New Yorkers, the MTA is constitutionally entitled to draw reasonable content-based distinctions between different types of advertisements and to consider its diverse customers. We intend to vigorously defend this lawsuit and will be represented by the preeminent First Amendment lawyer Victor Kovner and his colleagues."

#alexandra fine
#dame
#dame products
#janet lieberman
#MTA
#original
Do you know the scoop? Comment below or Send us a Tip