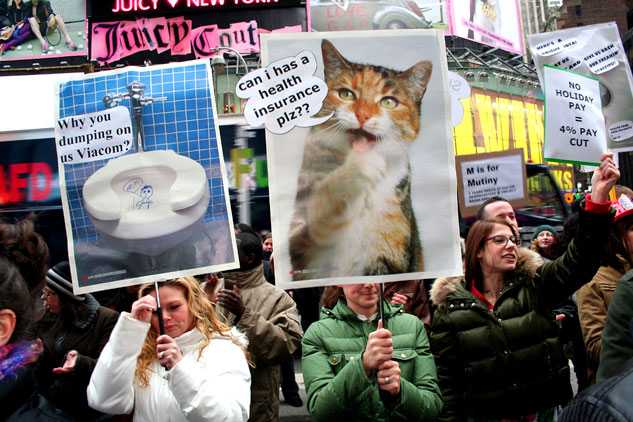 In some good news, the bigwigs at Viacom have heard the angry cries of their permanent freelancing employees, and today announced they were ready to concede. Just over one week ago the company Scrooged over a large portion of their workforce when they announced permalancers insurance benefits and their 401K plans would soon be a ghost of Christmas Past. Demanding equal treatment with full time employees (which the permalancers basically are), the group took it to the streets to regain what was being taken from them. With so much high profile coverage of this rebellion, did Viacom really have a choice? Outside of the 1515 offices earlier, the protesters gathered for a 3rd day and The NY Times reports that their anonymous leader held up an email "and rallied the group, saying: 'There’s a lot in this we don’t know about…This is just another step in this situation.'"

Gawker got a hold of the memo sent out a little over an hour ago by Viacom's JoAnne Griffith, which included the following changes:

Not only that, Griffith also states that they have "implemented a process for evaluating freelance and temporary employee positions for possible conversion to staff positions," promising more news on January 31st.