Veterans March As City Honors Them 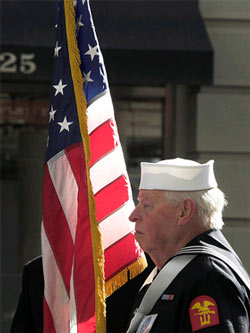 Yesterday was the city's day to honor and remember veterans of the U.S. armed forces. The 88th annual Veterans Day Parade started with the Eternal Light Monument Ceremony in Madison Square Park, followed by a parade up Fifth Avenue to 56th Street.

An estimated 20,000 gathered for the parade, and there were veterans from World War II, Korean War, and the Iraq War. Mayor Bloomberg said, "You should know that 70 New Yorkers have given their lives in Iraq and Afghanistan, and we owe them more than we can ever say." One Iraq war veteran, Rob Acosta, who lost his hand from an insurgent's grenade, spoke to the Post. He traveled from Oregon to march in the parade, and said, "People were waving and saying, 'Thank you.' And, 'Welcome home.' It makes a difference. It makes you feel good."

And federal, state, and city offices are closed today, as well as public schools. There is no post office service (expect Express Mail), street cleaning/recycling/garbage pick-up is suspended, and alternate-side parking regulations are suspended. Trains are operating on regular weekday schedules.

Photograph from the Veterans Day Parade by David Reeves on Flickr