Veteran of Kuwait and Iraq Gunned Down in Brooklyn 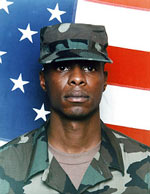 After serving tours in the Middle East, it was a Brooklyn backyard barbecue that proved deadly for Sergeant Kidson George. The 26-year-old man was gunned down on the porch of a Crown Heights home where he was celebrating the 4th of July with his girlfriend and others. George was shot twice in the chest by his girlfriend's former boyfriend, sending children screaming and dashing for cover.

An unidentified 27-year-old woman was hit by a stray bullet in the leg, but survived. George's girlfriend, who he was standing next to on the porch, was uninjured. The murdered army mechanic was stationed at Fort Dix, but called Brooklyn home (he was born in Trinidad). His new girlfriend's ex-boyfriend was described to the Daily News as a drug dealer by witnesses at the scene.