Vet Who Sewed Heroin Into Puppies' Tummies Arraigned In NYC A Venezuelan veterinarian was arraigned on charges related to heroin import and distribution in a federal court in Brooklyn this afternoon. The veterinarian, Andres Lopez Elorez, who was extradited from Spain on Monday, is accused of the horrifying act of sewing packets of heroin in the stomachs of puppies.

"Traffickers will go to great lengths. These guys are evil geniuses in ways to think and hide the drugs, secret them," DEA Special Agent in Charge James Hunt, according to NBC. "This case was exceptionally heinous."

The Drug Enforcement Agency began investigating Elorez 13 years ago, when they discovered he was allegedly involved in a heroin smuggling ring based in Colombia. In addition to the canine couriers, he also allegedly used human couriers to import heroin into the U.S. The Colombian police raided Elorez's vet clinic in 2005 and "found 6.6 pounds of heroin surgically implanted in six puppies."

Elorez, who is being detained pending trial, was actually arrested in 2015 in Spain by U.S. Marshals, but it took years to bring him stateside. He faces a minimum of 10 years, and up to lifetime, in prison. "As alleged in the indictment, Elorez is not only a drug trafficker, he also betrayed a veterinarian’s pledge to prevent animal suffering when he used his surgical skills in a cruel scheme to smuggle heroin in the abdomens of puppies," stated United States Attorney Richard Donoghue. "Dogs are mans’ best friend and, as the defendant is about to learn, we are drug dealers’ worst enemy.” 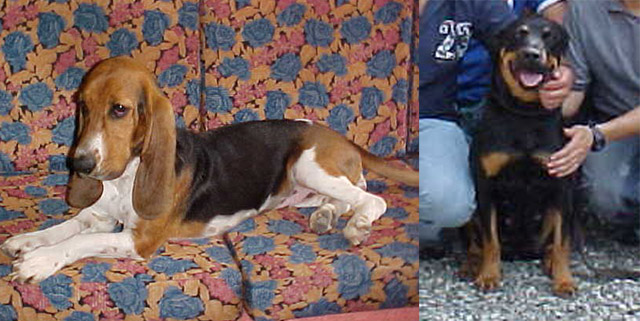 The feds also shared two good tales/tails: One of the dogs, a basset hound named Donna, was adopted by a Colombian National Police officer and his family, while a Rottweiler became a narcotics dog for the CNP—she was named Heroina.

#Andres Lopez Elorez
#bad vet
#colombia
#dea
#dogs
#drugs
#heroin
Do you know the scoop? Comment below or Send us a Tip