Here is a heist for our modern times: A smooth criminal absconded with $13,000 in jewelry plundered from a vending machine in September, charging his haul to stolen credit cards.

As you probably will have intuited from the price tag, these vending machine jewels are not the plastic baubles dispensed at the drop of a quarter from those pods outside supermarkets. The William Vale, a luxury Williamsburg hotel, boasts (or, boasted) a casually high-end outpost for designer Marla Aaaron to sell her wares: Locks done up in precious metals and stones that run from anywhere between $165 to $1,588 apiece.

The police did not provide details on what, exactly, the suspect made off with. They are, however, seeking a man in his 20s or 30s, about 5'10" in height, for grand larceny committed on September 20, around 1:15 p.m. They have released surveillance photos to help the public help them catch the thief. 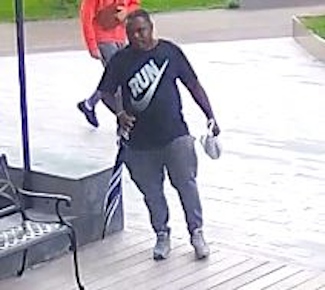 According to the NY Daily News, the machine in question had disappeared as of Sunday. It does move around, though: Aaron first situated it outside the Brooklyn Museum. According to videos posted on her website, she drew inspiration for the one-stop shop from a trip to Japan, where consumers can purchase pretty much everything via vending machine. Aaaron wanted to make "precious things ... accessible in unusual places," she explains, adding that "it's crazy to put jewelry in a vending machine."

We have reached out to Aaron and the William Vale to ask what happened to the vending machine, and where it will go next. We will update if we hear back, but in the meantime, the police want anyone with information in regards to this incident to reach out to Crime Stoppers (all tips are confidential).