Hours after a court hearing about his fate, an undocumented pizza delivery worker who was detained while bringing food to the Fort Hamilton army base in Brooklyn was released from detention. Pablo Villavicencio had been facing deportation for nearly two months, but federal judge Paul Crotty ordered Immigration and Customs Enforcement to release him—and stayed his deportation while he continues to pursue his green card.

An overwhelmed Villavicencio told reporters, "I’m very happy to be free. I’m happy to be reunited with my wife and children," and "I am well… so happy for my wife, my daughters, my lawyers. Thank you! Thank you for everything."

Villavicencio's ordeal began on June 1st while making a delivery to the Bay Ridge base. After showing his NYC ID, a soldier asked him for proof of citizenship, and detained him when Villavicencio was unable to show any. Military Police notified ICE, and Villavicencio was taken into custody and slated for deportation.

Villavicencio entered the United States 10 years ago and reportedly applied for a green card in February. His wife, Sandra Chica, is a naturalized U.S. citizen and their two toddler daughters are citizens as well.

After Judge Crotty's order, which was issued around 6 p.m. on Tuesday, Villavicencio was released from the detention facility in Kearny, NJ, and embraced his family:

Pablo Villavicencio, a Brooklyn pizza delivery man detained by ICE after being stopped at a Brooklyn army base and held on a 2010 deportation order is released from Hudson County Correctional in Kearny, New Jersey Tuesday, July 24th 2017 following a federal judge’s ruling.

City Council Speaker Corey Johnson was there for Villavicencio's release, and he told the NY Post, "It’s a very emotional day. This family has been traumatized. The city puts forward a lot of money every year for legal representation, and on a day like this we know that every penny is well worth it." 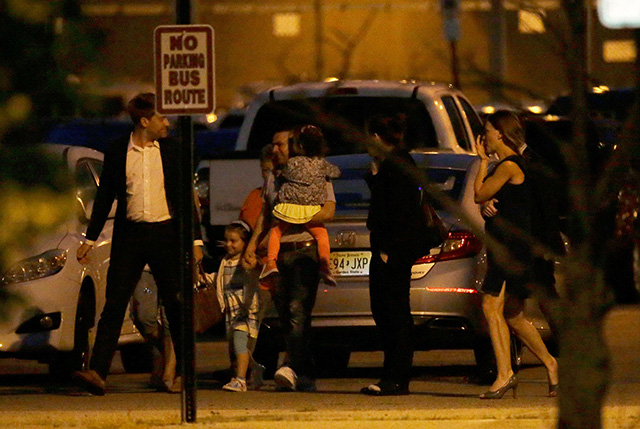 Pablo Villavicencio carries one of his daughters after being releases from the ICE detention facility in Kearny, NJ (Julio Cortez/AP/Shutterstock)

"Finally - some good news! Tonight a federal judge ordered the release of Pablo Villavicencio from Immigration and Customs Enforcement Detention (ICE) detention, which will pave the way for him to secure valid immigration status. I am so happy for his family, especially his wife Sandra and his daughters Luciana and Antonia. I know this has been beyond painful for all of them. Frankly, this has also been painful for all of us New Yorkers who care about justice and our status as a sanctuary city.

What happened to Pablo was inhumane. This decision rights an incredible wrong, and sends a clear message to President Trump that the rule of law still applies."

"The rule of law, humanity and morality prevailed tonight with the Court's order releasing Pablo back to his family and community," Adriene Holder, Attorney-In-Charge of the Civil Practice at The Legal Aid Society, told WNYC's Beth Fertig after Crotty's order. "This decision should serve as a rebuke against the Trump Administration and its merciless crusade to tear families apart."

#deportation
#ICE
#immigration
#nyc id
#Pablo Villavicencio
Do you know the scoop? Comment below or Send us a Tip