A very good Golden boy freed himself from a villain's clutches last week, inadvertently solving his own dognapping when he pranced out to greet the plain-clothes cops who showed up at his captor's door.

According to the NYPD, an investigation into a separate string of robberies brought police to Gravesend on Thursday afternoon, around the same time pet-owners Frella Correa and Ever Vega arrived home to find their two-year-old golden retriever, Scooby, missing. The pair reportedly ran outside to look for him, only to find officers already on the tail of a burglar who'd broken into and pilfered four homes in the area. Having recently identified a suspect from security camera footage from one of the sites, police showed up at Cory Gaudio's door and knocked. Gaudio answered, accompanied by Scooby, an excitable boy who just wanted to say hello. 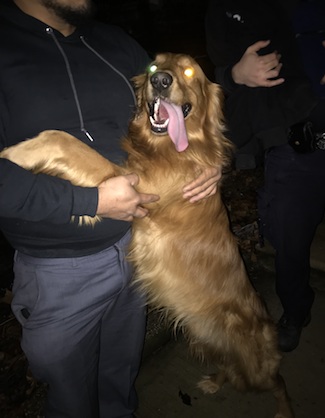 Look at this Good Boy. (Courtesy of the NYPD)

The retriever, of course, was clue number one, but according to the NYPD, officers also spotted a number of other items "in plain view" that had been reported stolen.

Police took Gaudio into custody around 4:45 p.m. on Thursday, and obtained a warrant to access his apartment on Friday. That search allegedly uncovered: Narcotic pills; a machete, a sword, a metal knuckled knife and an expandable baton; electronic equipment; jewelry; a police scanner, which Gaudio may have used to monitor NYPD activity in the 62nd precinct; credit and debit cards; green cards, passports, and a driver's license; and, damningly enough, a dog leash with Scooby's name embroidered on it.

Scooby was reunited with Correa and Vega at the scene, and according to Correa, he seemed extra jazzed to see his humans. "He was so happy to see us," Correa told the NY Post. "He was jumping around. Of course, I hugged him. Even the neighbors. They were helping to look for him, too. We were so scared."

The Post reports that, in court on Saturday, prosecutors said Gaudio seemed to accidentally admit his own guilt when police arrived at his door. "So you have me on possession of a stolen dog?" he allegedly asked, backtracking to explain that he'd "found" Scooby and intended to post a reward for him, which sounds a lot like a hostage situation to me. In any case, thanks to Scooby's unflappable enthusiasm for attention, he is home safe.

#burglary
#dogs
#good boy
#nypd
#scooby
Do you know the scoop? Comment below or Send us a Tip