It's an incredible honor to have what was once the world’s longest suspension bridge named after you—assuming they spell your name right. The Verrazano-Narrows Bridge, which opened in 1964 and connects Staten Island and Brooklyn, memorializes 16th century Italian explorer Giovanni da Verrazzano, who first sailed into the New York Harbor in 1524. (That’s about 85 years before English navigator Henry Hudson arrived at the same point.)

But perhaps it’s a good thing Giovanni wasn’t around to see the day when the bridge’s shiny new signage was revealed… with the incorrect spelling.

Several New York lawmakers point to documents showing Verrazzano’s name spelled with two z’s, not one. Recently, the New York State Senate and Assembly unanimously passed a bill to officially correct the spelling on all the bridge signage. (The current bill suggests replacing the signage only when normal wear-and-tear necessitates, to bring down costs.) The legislation heads to Governor Andrew Cuomo, who has previously expressed support for a spelling correction.

In the grand scheme of random bills our lawmakers have considered, this doesn’t make much of a splash. And when I called up the director of the Italian Historical Society of America to get to the bottom of the spelling, he didn't seem to think the missing z was a big deal.

“The bottom line is both spellings, that is with the one z and the two zs, are perfectly acceptable,” John J. LaCorte told me.

LaCorte is in his seventies now, and he’s the son of John N. LaCorte, the Society’s founder and the chief champion of the efforts to name the bridge after Verrazzano while it was still in the planning stages in the late 1950s.

“He was quite a crusador, quite an intense individual,” said LaCorte junior. “He was never discouraged, never backed down, and he was going to accomplish this goal. And he did.”

It wasn't easy. LaCorte Sr. wanted to honor Verrazzano and boost public sentiments toward the Italian-American community, but city planner/Parks Commissioner/public works overlord Robert Moses was adamantly against it.

As LaCorte Jr. puts it: “[Moses] said it would be named after Verrazano over his dead body.”

LaCorte Sr. managed to secure the influential support of then-governor of New York W. Averell Harriman, as well as the governors of New Jersey, South Carolina, Rhode Island and Maine. In 1960, with a few years to go before the bridge would officially open, Governor Nelson Rockefeller signed the bill to secure the name.

But the dust wasn’t fully settled. On November 22, 1963, President John F. Kennedy was assassinated. The country was in shock and in mourning. And soon after, a petition gathered thousands of signatures to instead name the soon-to-be-opened bridge in honor of JFK.

So LaCorte Sr. called in a favor.

“Another individual who [my father] was working toward getting acknowledged was Charles Bonaparte, who was the founder of the FBI,” explained LaCorte Jr. “We had just gotten a monument placed in the Department of Justice in Washington.”

And who was the head of the Justice Department in 1963? Jack’s brother Robert Kennedy.

“As soon as he heard there was this movement, [my father] called up Robert Kennedy,” said LaCorte Jr. “Bobby Kennedy was very cooperative and said, ‘John, don’t worry about it. I’ll take care of it.’ And he did. Ultimately, the airport was named after him.” 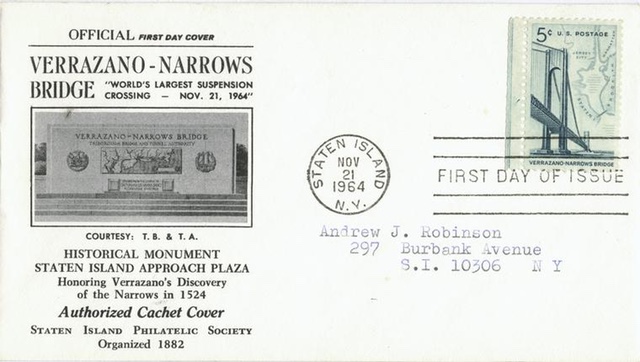 When the bridge finally opened in November of 1964, the signs bore the name: “Verrazano-Narrows Bridge.” Which brings us back to the original question: Why is there any confusion over the spelling?

“How it divided, I’m not completely clear. My father was for the one z,” said LaCorte Jr. “He did some documentation and he was able to find evidence of one z. From a practical point of view, it made the sign shorter. It’s a very long name! To save one letter, why not.”